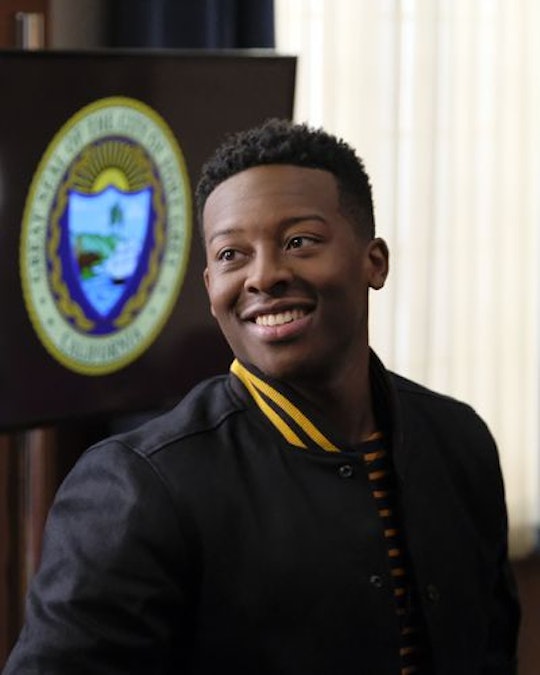 Fans Will Fall In Love With Courtney Rose On 'The Mayor'

ABC is premiering a new show this fall, about an entertainer who ran for elected office as a publicity stunt an unexpectedly won. No, this is not about Donald Trump. The show is called The Mayor, and stars some familiar and unfamiliar faces. Alongside Lea Michele, the lead of the series is pretty unknown. So who plays Courtney Rose on The Mayor? Brandon Michael Hall may not have a mile-long list of credits just yet, but he does have some very impressive training under his belt. If his face does look familiar, that could be because he's appeared on TV a time or two, though this is his first leading role.

In the show, The Mayor, Courtney Rose is a smart and talented though struggling rapper. In an effort to build up some buzz, he decides to run for mayor. And then much to everyone's surprise, he actually wins. Suddenly, Courtney has to figure out how to be a politician and run the city. Luckily, he has help in the form of campaign manager Valentina Barella, played by Lea Michele, who wants to help him make a real difference in the community, and in his mother Dina Rose, played by Yvette Nicole Brown, always there to keep a loving, watchful eye on him. So while the parallels to the presidency are pretty hard to miss, it looks like this show is going to be about an outsider as a force for good.

This will be the first time that Hall will be leading a series, though it is far from the first time he has acted professionally. According to IMDB, his first role on TV was as a cop in the series Unforgettable. He also had one-off roles on Broad City, where he played the "Delivery Guy" and on The Characters. Before The Mayor, Hall's biggest role to date was as Julian in the well-regarded TBS series Search Party. Hall appeared in nine episodes of the show, about a group of unlikeable 20-somethings who suddenly become embroiled in a murder-mystery.

Though Hall hasn't been in the business for a long time just yet, viewers shouldn't discount him as a force to be reckoned with. The young actor trained at the Juilliard Drama Division, the British American Drama Academy, and the South Carolina Governor School of the Arts and Humanities. So yeah, I'd say he has some top-notch qualifications. The Mayor, with its impressive supporting cast and producers could just be the vehicle that drives Hall to the very top of the A-list.

The show is co-executive produced by rapper and actor Daveed Diggs, most famous for his Tony-award-winning role in Hamilton. In The New York Times, Diggs has nothing but praise for 24-year-old Hall. "Courtney Rose is the kind of person who can charm his way into and out of most situations, and Brandon is that dude," Diggs told the outlet. "He’s the most charismatic dude I’ve ever met." Considering the fact that Diggs worked closely for years with Lin-Manuel Miranda, that is high praise indeed.

In just a few years, Hall went from a small hometown in the South to living in Los Angeles as the lead of a brand new series on ABC. According to the article in The New York Times, Hall was raised in a town about 30 miles outside of Greenville, South Carolina. Before he was accepted to Juilliard, Hall had never even been on an airplane before. He immediately fell in love with "the grind," and apparently hasn't looked back. If he really is the most charismatic guy in the world, something tells me we'll be seeing a lot more of him in the future.