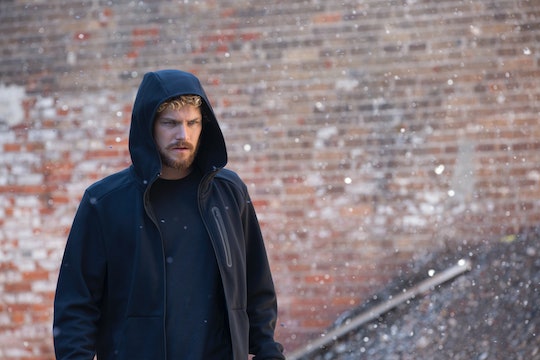 Danny From 'Iron Fist' Has 'Game Of Thrones' Ties

There's a new Marvel superhero coming to Netflix. Danny Rand, also known as Iron Fist, is getting his own show and based on how well the other Marvel shows have done on the streaming platform, this one is sure to be a hit. So who plays Danny Rand on Iron Fist? If you're a fan of Game of Thrones, you'll probably recognize him.

British actor Finn Jones is the final Defender and he looks perfect for the role. On Game of Thrones he played Loras Tyrell, Margarey's brother and Cersei's betrothed for a very brief period of time before things went south for the Tyrell family. Prior to his role on the hit HBO series, Jones appeared in various other TV shows including Life in Squares, The Sarah Jane Adventures, The Bill, Hollyoaks, and Hollyoaks Later. He's also appeared in a few films as well, including The Last Showing and Sleeping Beauty, a fantasy action film that should not be confused with the Disney animated classic — though it is loosely based on the same tale.

As the final Defender, Jones will then go on to reprise his role as Danny in The Defenders, which is due to hit Netflix later this year. The series will combine all four of the Netflix Marvel superheroes: Daredevil (Charlie Cox), Jessica Jones (Krysten Ritter), Luke Cage (Mike Colter), and Iron Fist (Jones).

Before that though, fans will get to learn about Danny's past in Iron Fist. The show begins after Danny's been gone for many years. His friends believed he died along with his parents, but that's not the case. Instead, Danny was trained in martial arts and had received the mystic energy of the Iron Fist, which he must control and also use to fight a darkness that's come for New York City.

Fans of the Marvel series will see a few familiar faces from Daredevil, including Claire Temple (Rosario Dawson) and Madame Gao (Wai Ching Ho), who seems to be familiar with the Iron Fist, based on the previews. It's unclear if any of the other Defenders will appear in the series, but it does seem like Iron Fist will act as a springboard into the superhero team-up and Claire, who's appeared in every Netflix Marvel series thus far, will be the link that connects them all.

You can see Jones as Danny when Iron Fist premieres on Netflix on Friday, March 17.