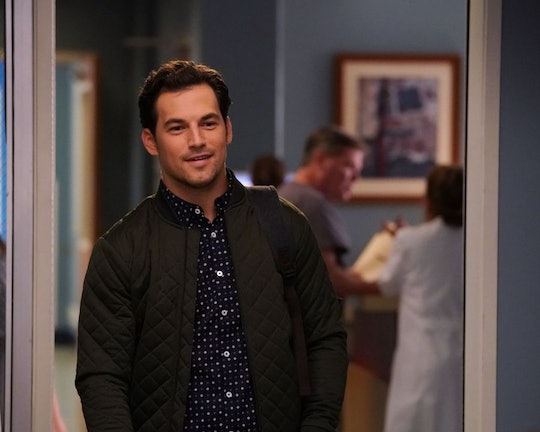 There are two things every Grey's Anatomy fan knows: never get too attached to a character (because they may die) and everyone's related. The latter was quickly proven in the Season 14 premiere when Arizona's bar hook-up turned out to DeLuca's older sister. So who plays DeLuca's sister on Grey's Anatomy? Italian actress Stefania Spampinato plays Carina DeLuca.

Soon after Arizona realized that Eliza "ghosted" on her, she naturally headed to the bar to drown her sorrows in some alcohol. That's where Carina made her move. One thing led to another and Arizona ended up bringing Carina home. If you're like me, and constantly forget Arizona and DeLuca live together, you were probably just as surprised as Arizona and Carina when DeLuca walked in. You were then probably more surprised when DeLuca started speaking Italian tot his new character.

Turns out Andrew DeLuca is actually Andres DeLuca, and for some reason he kept his Italian ethnicity, along with his sister, a secret. The two reunited siblings quickly got into a fight in Italian that neither Arizona nor I understood. Honestly, if you speak Italian, can you let me know what they were fighting about?

Despite the siblings' early confrontation, DeLuca felt close enough to his sister to still set up a meeting between her and Dr. Bailey. It turns out, just like pretty much everyone else on this show, Carina is also a doctor, who specifically works in obstetrics and gynecology, or she's an OBGYN for short.

Still, because some people don't seem to care about this subject, she's conducting her study under the guise of figuring what would be needed for a woman's brand of Viagra and she just needs Bailey to approve the study to happen at Grey Sloan Memorial Hospital. Because Bailey is one of the few women who has become the Chief of Surgery, Carina thought she'd be the perfect person to work with, and she was right.

Now Carina's working on her study at the hospital, and according to Entertainment Weekly, she'll be sticking around for a multi-episode arc. While she's working on this study, it's clear she'll continue to explore her feelings for Arizona, but will this just be another short lived relationship for Arizona, or could this one actually stick? Right now, it's much too early to call, but many people already like her better than Eliza.

Additionally, one has to wonder what's the issue between the two DeLucas. Why has Andrew never mentioned his sister? And why is she working at the hospital now? Besides the fact that Bailey is an awesome Chief of Surgery, it's no coincidence that Carina chose to work at the same hospital her little brother works at. So, what does she want with him? This is also too soon to tell.

What fans do know is, thanks to Carina's study, she may have just saved Amelia's life. At the end of the episode, Amelia decided to try the study for herself after having a pretty rough day. However, the MRI scan of her brain uncovered something that made her day go from bad to worse. It turns out Amelia has a brain tumor, and unfortunately probably the best person to operate on it would be herself. Fans will have to wait and see what this means for Amelia and how she'll handle this turn of events.