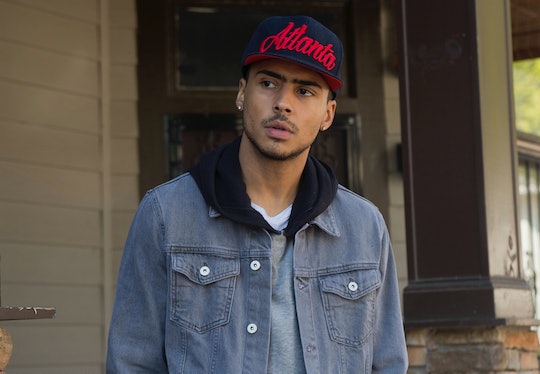 Derek On 'Star' Was Born To Play The Role

Lee Daniels is ringing in 2017 with the return of his newest show, Star. The musical drama aired it's series premiere right before the holidays and it's early fans were left anxiously awaiting for the next episode. Thankfully the wait is almost over and viewers will finally be able to find out what happens next for the fledgling all girl group that is made up of Star, Alexandra, and Simone. While Star and Simone continue to run from their past, Alexandra has already secured herself a love interest in the neighborhood activist, Derek. So who plays Derek on Star? Up and coming actor Quincy Brown has secured the role and he's pretty perfect for the part.

It's no surprise that Brown is now starring on a show that's just as much about the drama as it is about the music. Brown is the son of model Kim Porter and singer Al B. Sure! and is also named after his godfather, music icon Quincy Jones. Moreover, Brown is also the adopted son of rapper Sean Combs, also popularly known as P. Diddy. You may even recognize Brown from his My Super Sweet 16 episode, in which Porter and Combs threw him a celebrity-studded party in Atlanta. Brown clearly comes from a musical family, but for the past few years his focus has been on acting and his new role on Star is definitely a step in the right direction for his career since it has the chance to put both his singing and acting chops to the test.

Brown is best known for his role as Chris Collins in the 2015 film, Brotherly Love, where he costarred alongside KeKe Palmer. Brown also made appearances in the films Dope, We the Party, and Street and appeared in the shows CSI: Crime Scene Investigation and The Haves and the Have Nots. Though Brown definitely seems to have his eye on his acting career, that hasn't stopped him from also dabbling in music.

He's released four singles so far, including his popular track "Friends First," which features rapper French Montana, and he signed a record deal with P. Diddy's label, Bad Boy/Epic Records back in June 2016. Besides his acting and singing, Brown also has a watch line called Chalk by Quincy and a jeans collection with Embellish.

It's clear Brown keeps himself busy, but I'm hoping for now his time will continue to be spent on Star. Although fans didn't see too much of Derrick in the first episode, it's already clear there's chemistry between him and Alexandra and I definitely 'ship it. Hopefully Alexandra will open herself up enough to really let Derek sweep her off her feet.