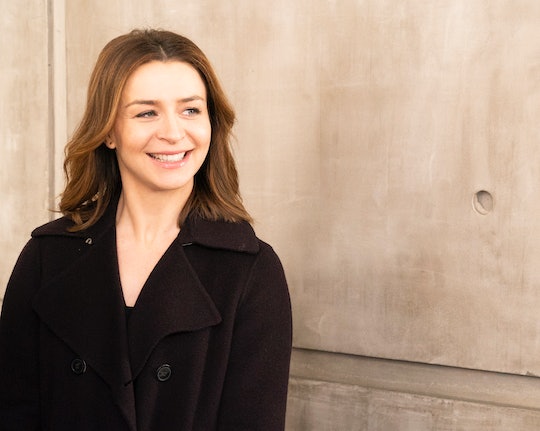 Almost all of Derek Shepherd's four sisters have made an appearance on Grey's Anatomy over the years: Caterina Scorsone's Amelia is a regular on the show; Neve Campbell's Liz once donated a nerve to fix Derek's hand; and Embeth Davidtz's Nancy was always a fan of Addison. Kathleen had been something of a mystery, but she's going to be appearing for the first time in Season 15. But who plays Derek's sister Kathleen on Grey's Anatomy?

TVLine announced that Amy Acker would be appearing as Kathleen in an episode focused on Amelia. Like the rest of the Shepherd siblings, Kathleen is a doctor, though she's a psychiatrist. Scorsone expressed "nervous excitement" about the standalone episode, referring to it as "a little movie on its own" to TVLine. She didn't share any specifics about Kathleen's role in the story, but since it's an Amelia-centric episode, it might delve into the Shepherd sisters' relationship.

Though Kathleen has been mentioned more than a few times on the show, viewers still don't know much about her. Derek had quite a few nieces and nephews, so Kathleen is likely a mother. But those scant details about her personal life and career don't indicate much about her personality. The missing piece of the Shepherd family is an enigma.

But Acker is a fairly well-known actress. After breaking into television with some guest spots on Wishbone (iconic), she had small roles in movies and on TV. Then she landed Winifred Burkle on Angel, which was her first major role. She endeared herself to fans as the shy-but-competent Fred before going on to play several other well-received parts. She played Kelly Peyton on Alias, Dr. Claire Saunders on Dollhouse, and Root on Person of Interest.

Those are just a few of Acker's credits, however. If you never caught one of those shows, then you might have seen her on Suits, Once Upon A Time, The Good Wife, or Agents of S.H.I.E.L.D. She's even appeared in the Shondaland universe before: Acker played Molly Madison in the Private Practice episode "A Family Thing." So it seems like Kathleen Shepherd has a doppleganger out there — or a secret identity that was so good it even fooled Addison.

These days, Acker stars on Fox's The Gifted as Kate Strucker. When it comes to her personal life, Acker has been married to actor James Carpinello since 2003. Together they have two children, a son and a daughter.

"I've been so lucky," Acker said when speaking to Collider about her many roles. "I've worked with such amazing writers that have made these characters, and then I've gotten lucky to play them." She cited Root on Person of Interest as a particular turning point in her career, stating that it was "the most challenging and the most rewarding."

Acker hasn't said much about playing Kathleen on Grey's Anatomy, though she did share a quick, celebratory comment on Twitter. "Yay! Can't wait!" she posted in response the the casting news. Grey's Anatomy airs every Thursday on ABC, and Acker will be making her debut sometime this season.