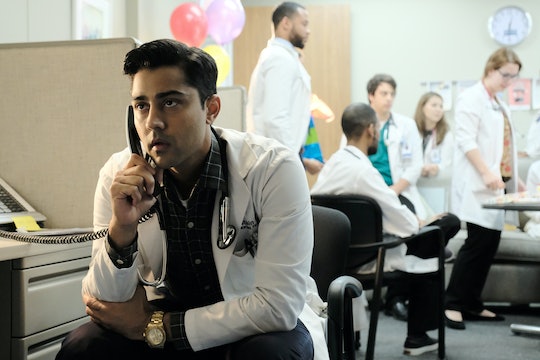 Devon Pravesh From 'The Resident' May Remind You Of Meredith Grey

Fans of Grey's Anatomy and House rejoice because there's an all-new medical drama airing this Sunday and you're sure to be hooked. The series, titled The Resident, follows young doctors in their final years of training while also learning some hard truths about the medical profession. One of those doctors is Dr. Devon Pravesh, a first year intern who comes under the tutelage of Dr. Conrad Hawkins. So who plays Devon Pravesh on The Resident? You may very well recognize him.

Manish Dayal snagged the part on the new series, and while it may be his first starring role it's certainly not the first time he's appeared on the small screen. Dayal first began as many actors do with small appearances on series like CSI: Crime Scene Investigation, Outsourced, Rubicon, Law & Order: Criminal Intent, and The Good Wife. He then got a recurring role on 90210, playing Raj Kher, who married one of the show's main characters, Ivy, before he was killed off due to the character's long battle with cancer.

Around the same time, Dayal nabbed a recurring role on the Freeform series, Switched at Birth, as Scuba, and then a few years later he earned yet another recurring role on Halt and Catch Fire. Most recently you may have seen Dayal as Vijay Nadeer on Agents of S.H.I.E.L.D.

Besides his number of roles on TV, Dayal has also done a lot of work in film as well. In fact, prior to doing his first TV show, he actually appeared in a number of movies, including On the Other Side, 4th and Forever, When Kiran Met Karen, and Karma Calling. A few years ago he had a starring role in the film The Hundred-Foot Journey, in which he acted alongside Helen Mirren. Some other films you may recognize Dayal from include Viceroy's House, California Scheming, Breaking the Girls, White Fog, and The Domino Effect.

Dayal's résumé is obviously extensive and starring in The Resident is only the next step in what is already a notable career. Dayal's character, Devon, is the rookie on the show. Having just graduated from Harvard Medical School, he'll quickly learn that what he was taught in class doesn't always apply in the real world, unfortunately. In The Resident, the series will look at how and why medical errors are the third leading cause of death in America, and it was also look at the chain of command that exists within industry.

Although Devon will report to Conrad, Conrad also has his own superiors to report to, including Dr. Randolph Bell, who plays by his own rules. But as time goes on, Devon will most likely learn that while working in the hospital may not be as perfect as he'd hoped, there are still good people who try to do the right thing for their patients. Given his newbie vibe, he kinda reminds me of this show's equivalent to Meredith Grey.

With an all-star cast, an interesting plot, and all the drama that comes from a show set in a hospital, it looks like The Resident will be a hit.

The new series premieres Sunday, Jan. 21 at 10 p.m. EST on FOX, right after the NFC Championship. It will then move to its regular time slot on Mondays at 9 p.m. EST. If you love medical dramas as much as I do, this is a show you'll definitely want to check out when it premieres. So don't miss it!