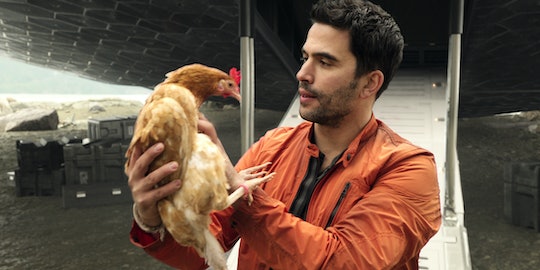 The Netflix reboot of Lost in Space is finally here, and while the new series is mostly about the Robinson family, there are other important characters that make up the cast as well. One of those characters is Don West, but who plays Don West on Lost in Space? Argentinian-American actor Ignacio Serricchio nabbed the role and should prove to be quite the charmer.

Serricchio was born in Buenos Aires, Argentina and went to Syracuse University to study directing, acting, Tai Chi, modern dance, stage combat, and voice practicum. Not only is Serricchio fluent in Spanish and English, he's also fluent in French and Italian. He worked in various plays, such as Othello, Rumors, Barefoot in the Park, and M. Butterfly, before getting small roles on TV shows like House and Unfabulous. He then appeared in the films States of Grace and Cold Play, before scoring a major role in the popular soap opera General Hospital as Diego Alcazar. (Are you impressed yet?)

Following General Hospital, Serricchio earned recurring roles on Ghost Whisperer and Privileged. He then did a number of films, including The Accidental Death of Joey by Sue, Quarantine 2: Terminal, and Seymour Sally Rufus. Serricchio then went back to TV, appearing in popular shows like CSI: Miami, The Finder, The Client List, CSI: Crime Scene Investigation, before getting a starring role on yet another well-known soap opera The Young and the Restless as Detective Alex Chavez.

While being a soap star, Serricchio also popped up in the series, The Bay, before moving on to Witches of East End. He then went on to have recurring roles in Zoe Ever After as Miguel Maldonado and Bones as Rodolfo Fuentes. You may also recognize Serricchio from his time on Girlfriends' Guide to Divorce, his latest role prior to Lost in Space.

For Serricchio, getting to play Don West was a happy surprise. Because Don was white in both the original TV series and in the 1998 film remake (Matt Leblanc played the character), Serricchio was sure he wouldn't get the part. He told the New York Daily News:

My brain immediately thought, 'Nah, they're never going to consider me because my name is Ignacio Serricchio. I immediately went into default and thought they're going to offer it to an American who's blond and blue eyes with an amazing body. They went completely in the opposite direction.

Thankfully, showrunner Zach Estrin wasn't afraid to shake things up in the reboot. Other changes he decided to make was having the eldest Robinson child, Judy (Taylor Russell), be African-American, and having Dr. Smith (Parker Posey) be a woman rather than a man. While some fans weren't exactly happy about all these changes, most fans are interested to see how the reboot holds up to the original series.

As for Serricchio, he's just excited about the experience of being apart of the series and the opportunities the role has afforded him. For example, he was understandably excited to meet Star Wars legend Mark Hamill, who came to the Lost in Space premiere. And when Serricchio isn't busy meeting his idols, he's also just having a great time hanging out with his family and friends, doing things like rock climbing in Hawaii and hanging out with horses.

Serricchio also gives back by visiting children with cancer in hospitals, specifically hospitals in Mexico. He also supports the Wildlife Waystation, an organization that sponsors endangered animals and has one of the largest chimpanzee sanctuaries in the U.S. Additionally, he's an advocate for adopting dogs (like he did) rather than shopping for them.

It's clear Serricchio is not only a great actor, but a compassionate person. You can meet his character, Don, by watching Lost in Space, which is now streaming on Netflix.