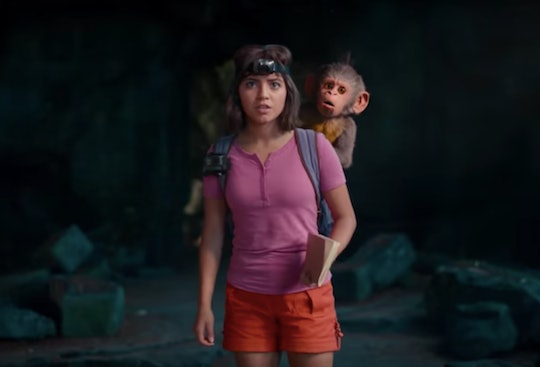 A live-action version of a beloved Nickelodeon TV show is about to hit the big screen and it will surely leave audiences wanting to know more about who plays Dora in Dora and the Lost City of Gold. And that'd be actress Isabela Moner. She may be 18, but she’s already racking up some big credits.

Indeed, Moner has been around the performing arts industry for years. Her first role came at the age of 10, when she starred on Broadway in a revival of Evita, Variety Latino reported. That same year she made her TV debut on The Next Big Thing New York as a singer. Film roles soon followed, with The House That Jack Built her first big-screen performance in 2013. The following year she landed her breakout role on Nickelodeon’s 100 Things To Do Before High School as CJ Martin.

Roles in big budget productions weren’t long to follow with Transformers: The Last Knight introducing her to adult audiences in 2017. She starred alongside Benicio del Toro in Sicario: Day of the Soledado, and re-teamed with her Transformers co-star Mark Wahlberg for Instant Family.

Dora & The Lost City Of Gold isn’t Moner’s first go-around with the story of Dora. Not only did she grow up as a fan of the series, she voiced the role of Kate on Dora and Friends: Into the City! between 2014 and 2016, according to her IMDb listings. She told the Worcester, Massachusetts Telegram that her previous love of Dora made her hesitant to sign on to the feature-length production: "It’s natural to wonder if what you love is going to be corrupted just to make money off us fans. I was skeptical about what Hollywood would do to something that was special to me."

What Hollywood did was to make a production that Moner is now immensely proud of. As the daughter of a Peruvian mother, the young actress feels close association with her Latin roots and jumped at the chance to learn the Peruvian dialect Quechua for the film.

"The Peruvian community is going to flip! Dora's adventures will take audiences to Machu Picchu where they'll explore the Incan culture," Moner recently told Forbes. "I had to learn Quechua to speak it in the movie because Dora is very cultured and she knows everything about everything. Between scenes, I'd call my great aunt in Peru to ask her about certain phrases and how to say them in Quechua... I'm still trying to grasp the fact that Peru is finally being represented so largely in Hollywood because it never has before. This is going to be huge in every sense of the word."

If that perspective sounds mature, it’s because Moner is wise beyond her years. TV Over Mind reported that she even skipped two grades and was accepted into college at age 15, a fact she also shared in a Facebook post back in 2017.

The film tells the story of Dora as a teenager who is sent to live with her cousin Diego in Southern California while her parents search for a lost city. AV Club compared it to Mean Girls, since Dora isn’t accustomed to city life or high school and so awkwardness ensues. But her sunny disposition and optimism work in her favor until she and three friends are snatched away bounty hunters on the trail of Dora’s parents. She’s tasked with pulling on all her knowledge and a lifetime of skills to find her family.

Up next for the talented actress is a film called Let It Snow, romantic comedy that pairs her with Kiernan Shipka, Mitchell Hope, and Odeya Rush. Until then, look for Moner lighting up the screen as the sunny Dora starting Friday, Aug. 9.