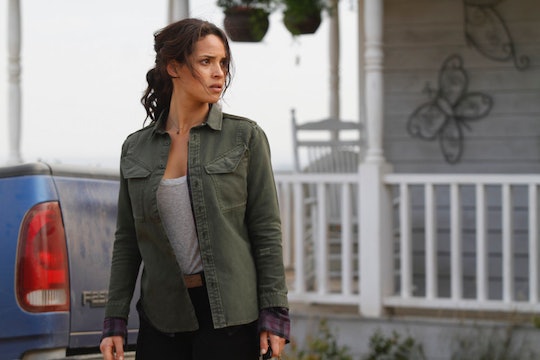 'Emerald City's Dorothy Is Perfect For The Role

On Jan. 6, viewers can follow a new Dorothy as she travels to the land of Oz. In NBC's new series, Emerald City, a grown-up Dorothy Gale finds herself swept away in a tornado to the land of Oz with only her dog by her side. (Sound familiar?) So who plays Dorothy on Emerald City? Actress Adria Arjona has secured the exciting role and I must say she already looks like she'll be a perfect fit.

Although this is Arjona's first big role, this isn't the first time she's appeared on a television series. Arjona had a recurring role on the popular HBO series True Detective as Emily, and also appeared in the Netflix original series, Narcos as well as Person of Interest and Unforgettable. Arjona has also been on the big screen in films such as Wedding in New York, Anomalous, and The Belko Experiment. She will also appear in the Pacific Rim sequel, Uprising, in 2018.

On Emerald City, Arjona's Dorothy is a bit different from the Dorothy The Wizard of Oz fans know. For one, she's not a child but instead an adult who's either a nurse or a doctor, as seen in photos from the pilot episode. She also has a love interest in the show who happens to be the Scarecrow. Additionally, based on the trailer for the series, it looks like Dorothy may have some powers of her own and there may be a reason she was brought to Oz.

In The Wizard of Oz, Dorothy is able to save the day by pouring water on the Wicked Witch of the West, but the obstacles Dorothy will face on Emerald City seem to be much more complicated than that. For example, there's a war brewing in Oz and Dorothy will be thrown right into the middle of it, whether she wants to be or not. Up against not only the witches (Glinda isn't as nice on the show apparently), Dorothy may also have to face off against the Wizard himself who has outlawed magic in Oz. (I guess this version of the character isn't so wonderful.)

You can watch Dorothy's adventures in Oz when Emerald City premieres for the first time ever on Friday, Jan. 6 at 9 p.m. ET on NBC.