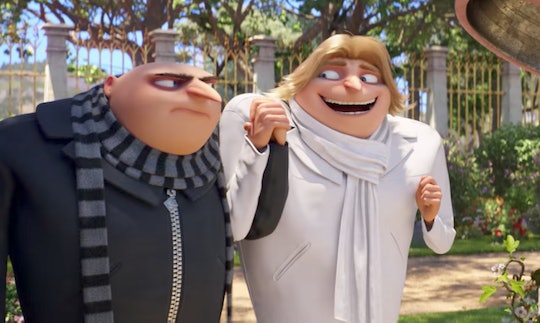 Dru From 'Despicable Me 3' Has A Familiar Voice

Even though the world is kind of a mess right now, there are ways to escape for a bit. Spending time with family, having a good laugh, and relaxing for a while are all great ways to take your mind off of things. And when you can do all three at the same time? Perfection. So, what is this magical activity you're reading about? Despicable Me 3, of course. The third movie in the Despicable Me franchise hits theaters this weekend, and features a new character: Gru's twin brother, Dru. So, who plays Dru in Despicable Me 3? You'll definitely recognize this actor.

That's right folks, Steve Carell, the voice of Gru, will also be taking on the new role of his evil twin brother, Dru. And yes, it's okay if you're more excited than your kids to see the new movie now.

Because there really is something comforting in the familiar, isn't there? Between the constant political hellfire, international terror attacks plaguing our world, and natural disasters taking place all over, it can be hard to see the good in things anymore. But, the fact that Steve Carell is playing his own character's twin brother in the latest Despicable Me film is pretty great, right?

Okay, so it doesn't totally make up for the fact that Senate Republicans want to take away health care from 22 million Americans, but it's still pretty adorable. And for any fans of The Office who have missed Carell on their screens these past few years, seeing Despicable Me 3 is a great way to get double the dosage of that memorable Michael Scott voice.

The movie, which will actually be the fourth movie from the Despicable Me franchise (the Minions movie also centered in on the same themes, and obviously featured the famed Minions), focuses on villian-turned-hero Gru's decision to go back to villainy when he meets his long-lost twin brother, Dru.

As Despicable Me fans will recall, Kristen Wiig also stars in the films as Gru's love interest, Lucy. While the rest of the movie's plot is still under wraps, it's clear that the family-friendly film will definitely be a great way to keep your little ones distracted. And with not just one, but two Steve Carell characters, Despicable Me 3 will probably be the comedic relief you need this summer as well. So, even if you don't have kids, no one could really blame you for seeing the movie all by yourself. Right?