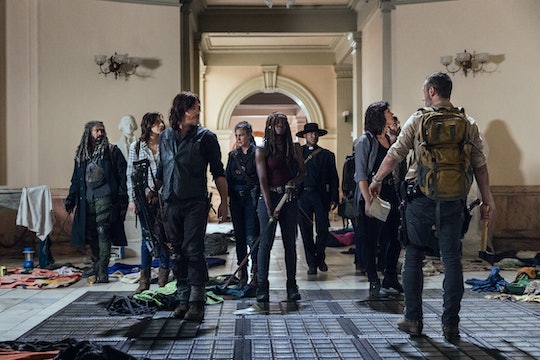 The Walking Dead fans may be in mourning before the new season even begins because protagonist Rick Grimes is leaving the show. In his place, however, are new characters from the comics, including Earl. Who plays Earl on The Walking Dead? John Finn has been in the business for decades.

John Finn is an actor and director who's best known for his roles in 1989's Glory and 2002's Catch Me If You Can. He's no stranger to television, though. Finn has had roles in dozens of shows such as The Good Wife and NCIS. On The Walking Dead, Finn will play Earl Sutton, a blacksmith. While their characters aren't married in the comics, on the show Earl is married to Tammy Rose, another new character this season. As Fansided explains, in The Walking Dead comic Tammy was married to a character named Morton. It seems that the show has combined Earl and Morton into one, with Earl serving as both Tammy Rose's husband and the community's blacksmith.

Here's another change that fans will notice if they read the source material: Earl mentored Carl and taught him how to be a blacksmith in the comics. Carl died in Season 8 of The Walking Dead — so Earl is out a mentee, but perhaps his welcoming demeanor will remain the same.

There's even more changes afoot for the show besides the new additions. Rick Grimes, the main character of The Walking Dead, is leaving at some point this season. This actually aligns with the vision of former Walking Dead showrunner, Scott Gimple (who is now the chief content officer of all things The Walking Dead). In an interview with The Hollywood Reporter about The Walking Dead Season 9 and how things will change, current showrunner Angela Kang (who was a writer for the show before being promoted to showrunner) said that the end of last season was supposed to be the end of "one chapter." Kang said:

[Gimple] always imagined that the end of season eight would close one chapter of the story of The Walking Dead. It really lines up well with how the story breaks in the books, as well. We're doing a time jump that coincides with the time jump in the comics. It does feel like the story enters a new chapter at that point. It's not that it's no longer The Walking Dead; it's still very much the Walking Dead world, but things change moving forward. It works well with the story we're trying to explore.

It makes sense, then, for a new chapter of the show to be complete with entirely new opening credits sequence for The Walking Dead Season 9. While previously the titles have featured photos and a very dark overlay, this new sequence features graphics and a lighter background. Some fans have taken that to mean this season will be more optimistic, but I wouldn't bet on it — this is a show about the apocalypse, after all. But if the producers are putting such care into the opening credits (as they seem to be, from interviews), perhaps it does contain symbolism for this season to come.

The changes may also be inspired by low ratings for The Walking Dead, which has plagued (no pun intended) the show for a number of years now. According to Vulture, it lost a third of its audience members under 50 years old. I'm not an expert, but perhaps injecting new blood (sorry, sorry) in the show will help with these ratings. With a new showrunner, new characters, and new stories, longtime fans are just as excited for the Season 9 premiere as any of them.