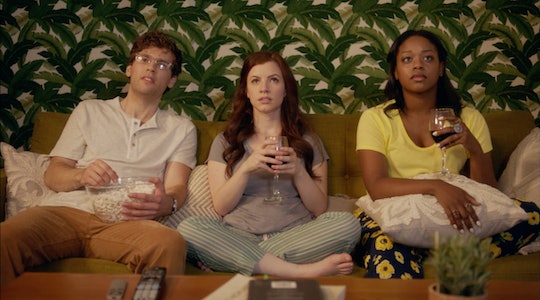 The first season of I Ship It aired on the streaming service CW Seed, but the second premieres on the CW on Aug. 19. It follows its fangirl protagonist Ella from one obsession to the next as she transitions from rocking out in an indie band to writing for her favorite TV show. But who plays Ella on I Ship It?

Helen Highfield takes on the lead role in the series. According to her official website, she's an Itacha, New York native who loves broccoli and color-coding her calendar. Her career goals are to incite tears and laughter in her audience, but she wouldn't turn down a spot in an Aaron Sorkin series or a costume-heavy period piece. Highfield has appeared in several shorts, including Beautiful, LovesIck, and, most recently, Diva. She popped up in an episode each of Law & Order: Special Victims Unit, Criminal Minds and Rizzoli & Isles. She had a regular role on the web series Rock-Star Cafe as Lilly Baumgartner.

Right before I Ship It, she appeared in Waking Up With Strangers, as well as the movie The Manhattan Front. According to her Twitter bio, she appears on the Fullscreen show The Friendless Five, too.

Highfield's social media is full of promo for her upcoming projects; I Ship It is all over her Instagram. She also posts snaps from her recent photoshoots, plus plenty of selfies. It's probably the best place to stay up to date on Highfield's projects, because she posts about her live theater performances there, including her recent appearance in The Rocky Horror Hipster Show. It seems like musicals (and music in general) were Highfield's first love, according to an interview she did with Cliche Mag.

Highfield explained that she always loved theater, but was focused more on singing than acting for a long time. At school, she joined choir and took part in all the musicals from eighth grade on. Eventually, friends recommended the Actor's Workshop of Ithaca to her and that was how she fell in love with acting, too. Now she gets to combine both on I Ship It, where Ella's emotions often take flight in song. She was excited about getting the chance to sing and record for the show, but she also adored playing Ella.

"I loved how messy and determined Ella is," Highfield told Cliche Mag, adding, "There's definitely a lot of me in Ella. We're both ambitious and can get kinda intense when we're going after something we want. We both feel a lot of feelings. Though I think Ella is a lot more impulsive than I am. I think that's part of what I loved about playing her."

She appreciated Ella's ambition too, because she felt that was a quality female characters were often vilified for. It sounds like Ella is a perfect part for Highfield that allows her to play a complicated woman while embracing her acting and singing skills. I Ship It gives Highfield a chance to do it all while Ella chases her fangirl dreams.

I Ship It airs Mondays on the CW.