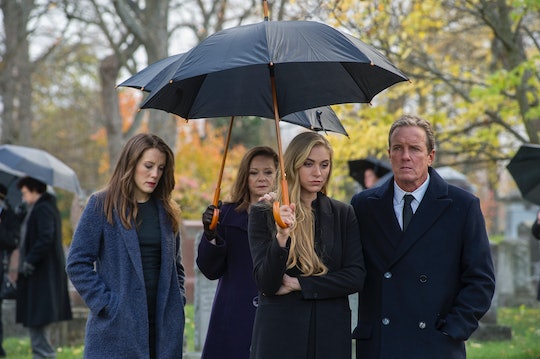 Who Plays Elle In Lifetime's 'A Daughter's Revenge'?

Lifetime’s A Daughter’s Revenge is a new thriller that follows a girl, Elle Spencer, on her quest for vengeance as she tries to exact revenge on her stepfather, David, who she blames for her mother’s death. She uses all kinds of manipulative schemes and even drags her vulnerable friend into the mess. Playing the leading role in a thriller must be challenging and exciting, so who plays Elle Spencer in A Daughter’s Revenge?

The beautiful villain in this new Lifetime movie is Jessica Sipos, and after seeing the trailer, it looks like she played the part effortlessly. The Canadian born actress hails from Vancouver Island, and if she looks familiar, it’s probably because she’s been in some of the most popular science fiction shows on TV. Sipos has appeared in SyFy’s Dark Matter, Wynonna Earp, and Ascension, as well as The CW’s Legends of Tomorrow. She recently had a recurring role as Sarah Mercer on Hallmark’s Chesapeake Shores, too.

Sipos has been on other numerous television shows throughout the past few years, including the award winning series, UnREAL, in which she appeared opposite Emmy Award nominee Constance Zimmer. Along with A Daughter’s Revenge, Sipos is set to appear in two other projects this year, including Hallmark’s Signed, Sealed, Delivered: To the Altar and a leading role in the film Goliath.

In her new movie, A Daughter’s Revenge, Jessica plays Elle Spencer, a girl who is manipulating her friend Anna to unknowingly set up her stepfather. Anna, who recently finished a stint in jail for a DUI, has no family or friends to turn to, so Elle steps in to play the supportive friend. However, Anna doesn’t know that Elle has ulterior motives and is only using their friendship to further her revenge game. Along with having Sipos in the lead role, it looks the movie has a great cast, including Linden Ashby as her stepfather David Spencer, Sierra Wooldridge as her friend Anne Bellcroft, and Claire Rankin as Michelle Spencer.

The movie has a famous set of writers as well. Andrea Canning, a correspondent on Dateline NBC, and Elizabeth Stuart, a producer for CNN’s A New Day and ABC’s Nightline, both created and wrote the script together, so it should reflect some of their journalism backgrounds and experiences covering murder cases throughout their career.

For Sipos, acting seems to be a family affair. Her older brother, Shaun Sipos, has been on tons of TV shows throughout the years, including Smallville, Black Sash, ER, and CSI: Miami, but his most notable TV role was that of David Breck on the hit series, Melrose Place. He has also appeared in a number of famous films like Final Destination II, The Grudge 2, The Skulls III, Comeback Season, Lost Boys: The Tribe, and Superbabies: Baby Geniuses 2. He currently has a recurring role as Adam Strange on SyFy’s new series, Krypton.

A quick glance at her Instagram page shows how much Sipos adores being outdoors. Her page is chock full of scenic, woodsy pictures, showing her fly fishing, camping, paddle boarding, boating, and hiking. Apparently, she can also fly a helicopter and kill it on a dirt bike, so I’m uber impressed. I have to say, whoever is taking her Instagram pictures is very talented because pretty much every photo looks like it was shot by a professional.

You can catch Jessica Sipos as Elle Spencer on A Daughter’s Revenge pretty soon. The thrilling Lifetime movie is set to premiere on Saturday, May 12 at 8 p.m. EST.