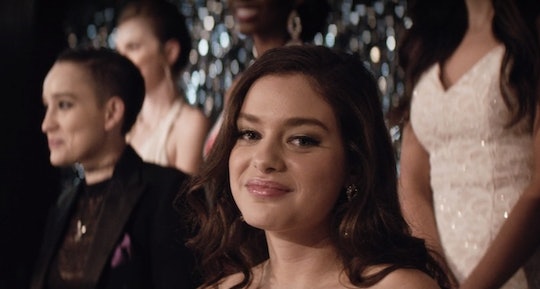 In the new Netflix original film Dumplin’, Willowdean Dickson gets by with a little help from three women: Dolly Parton, her aunt Lucy, and her best friend, Ellen. While the first two aren’t readily in her life at the start of the movie, El is her rock — her Dolly-loving, chipper, and supportive BFF. Odeya Rush, who plays Ellen in Dumplin’, is, in appearance, the conventionally attractive Southern Belle who might compete in pageants like those at the center of the film’s plot. But there’s more to the character — and the actress — than meets the eye.

Rush is relatively new to the Hollywood scene. Her first credit is from a 2010 episode of Law & Order: Special Victims Unit. She played the role of Joni Jerome in the Jennifer Garner drama The Odd Life of Timothy Green in 2012. But her breakout role came as Fiona in the 2014 film adaptation of the popular young adult novel, The Giver. Since then, she has appeared in popular films such as horror comedy Goosebumps and the Oscar-nominated drama Lady Bird. Rush is also an aspiring writer and director, with a short film Thanks, and a music video for the song Rooftops, by Harry Nathan, under her belt.

Like the rest of the film’s characters, El speaks with a silky smooth southern accent. But Rush, like stars Danielle Macdonald (Willowdean) and Jennifer Aniston (Will's pageant queen mother, Rosie Dickson), had to work at mastering that dialect. But one thing you wouldn't know from her accent (or lack there of) is that Rush was actually born in Israel. The 21-year-old actress emigrated from Haifa when she was 9-years-old, and they lived in the South for a short period time (Alabama, to be exact), which may be why she was able to emulate that accent so well.

However, she’s actually had a lot more work with accents than you might expect. In a 2014 Teen Vogue interview, Rush told the magazine that after moving to New Jersey, she’d adopted that regional accent on top of her Israeli one. Anyone who has ever heard someone from either her home country or the northern U.S. state knows that those are pretty thick accents, so clearly Rush spent some time trying to lose hers.

In addition to her impressive voice work, Rush has got some comedic chops. Though most of her roles up until this point have been fairly serious, she definitely has a sense of humor. In an TODAY show interview during promotion for The Giver, she joked about how she auditioned for the role six times, and wore the same shirt every time. It’s the kind of silly thing El and Willowdean might joke about, so it looks like though Rush had to put on an accent, she was leaning into her own sensibilities to play this character in Dumplin’.