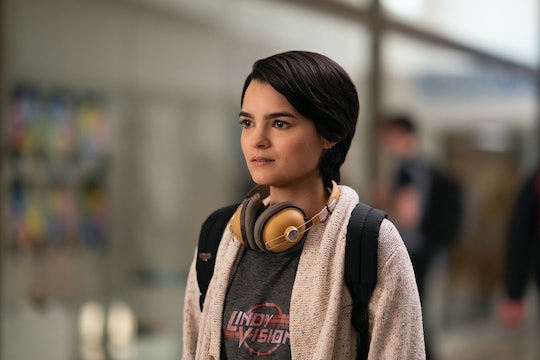 Brianna Hildebrand Is Switching It Up With A Brand New Role

Netflix has a new drama about three girls who meet at a Shoplifters Anonymous meeting and bond over their risky hobby. At first glance Elodie, Moe and Tabitha don't have much in common besides their propensity to steal. One is described in Netflix's official synopsis as a "grieving misfit," another is the "mysterious outsider" and last there is the "imperfect picture of perfection." I was most intrigued by "grieving misfit" so I wondered: who plays Elodie on Trinkets?

Her name is Brianna Hildebrand and you might know her from the Deadpool franchise. She plays Negasonic Teenage Warhead in the films. The role of Elodie is a complete departure from that role or most of her other ones, and she told InqPOP! that's exactly why she's so excited about it. “I really wanted to play Elodie and it’s mostly because I have never had a chance to play a character like her. I play a lot of really like severe kind of apathetic type of characters," she said during an exclusive interview the site did with the three main cast members. "I just wanted to play a character that is a bit endearing in a way that she feels completely out of control in every sense."

As for her castmates, they are addressing important topics in Hollywood on and off screen. Quintessa Swindell, who plays Tabitha, identifies as non-binary and they told GLAAD why it's important that they talk about their gender identity publicly. "I feel as though there is an absolute necessity, given the current political climate, to draw focus to the many queer communities that lack representation on television and in film," they said. "Without proper representation for queer communities, people who are exploring their identity can be pushed to the side. In my experience, if I had not moved out of my small town and found a way to be surrounded by queer peoples, I would not be who and where I am today."

To be clear, their character on Trinkets is female, but they are comfortable presenting as such. "One of the more beautiful experiences I had while shooting this season was diving back into past high school experiences and finding strength in many things I had not in the past. I found strength and resilience in fighting for Tabitha, given many of the tribulations she finds herself within this season," they told GLAAD.

The final member of the Trinkets tribe is Moe, played by Kiana Madeira who you may know from The Flash or Wynonna Earp among other TV shows. Like everyone else, she's excited about the important message the show has for fans. “I think it is important to allow yourself to be in more than one thing. Surround yourself with people who will support you and understand you,” she told InqPOP!

I'm so excited to watch Trinkets June 14 to see all of the positivity and representation the show is bringing.