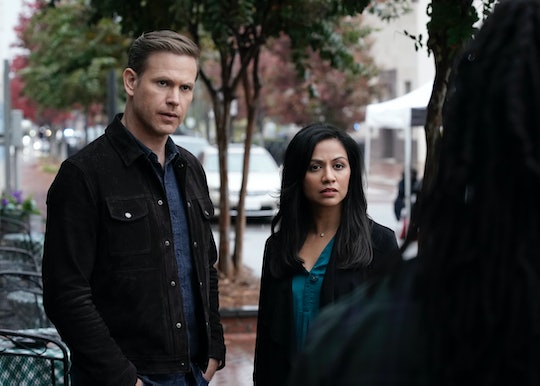 Karen David Is More Than Just A Guidance Counselor On 'Legacies'

While teens were busy forging love triangles in the Feb. 21 episode of Legacies, the adults were engaged a little romance of their own. Alaric and Emma shared a few tender moments over drinks and karaoke, and despite Emma admitting she was seeing someone else, they ended their night with a passionate kiss. If you are as smitten by her as Alaric is, you are probably wondering, who plays Emma Tig on Legacies?

Indo-Canadian actress Karen David takes on the role of Emma on Legacies, and if you heard her sing her heart out in “We’re Gonna Need A Spotlight,” you may have already guessed that she’s a seasoned singer too. When talking to the Wandsworth Guardian, David revealed that she was born in India to a Jewish Indian father and Khasi and half Chinese mother. She was raised in Canada, but moved to England when she was 17, so that she could pursue her studies at the Guildford School of Acting in London.

David got her first big break when she was cast in the original London production of Mamma Mia! in 1999, she told the Evening Standard, and her first screen role was opposite James McAvoy in a film called Bollywood Queen. After that, she was featured in a number of British and American TV shows and films, including Jack Ryan: Shadow Recruit, Castle, Galavant, and Criminal Minds, but her most notable role was as Princess Jasmine on ABC’s fairytale drama, Once Upon A Time. Along the way, David recorded an EP album called Dust To Stars and a club remix album titled Hypnotize.

On Legacies, David plays Emma Tig, a witch-turned-guidance counselor who helps the students and faculty of Salvatore School get through their personal and supernatural dilemmas. But she doesn’t just use her psychology degree, she uses her magic too. In Episode 3, when a gargoyle entered the school and tried to attack the younger students, Emma saved the day by casting an invisibility spell to hide them from the monster. In Episode 11, when the mind-control slugs made their way on to the Salvatore School campus via a magical unicorn, Emma found a spell that would zap the bugs out of the student body.

But Emma’s not just a fierce protector of the school, she is becoming Alaric’s new love interest as well. She is the only adult female in the school, and considering how nice she is and how much time Alaric spends with her, I’m not surprised that he’s finally crushing on her. In Episode 11, while the students are busy with their talent show, Emma (who has a slug in her) and Alaric get drunk and talk about their lives and feelings. They loosen up for some fun, wearing silly sunglasses and boas and singing karaoke together. When Alaric asks her out, Emma tells him that she’s seeing someone, and that he should have asked her sooner.

Emma may have let Alaric off gently, she didn’t shut him down completely. When they realized they might have mind-controlling slugs inside them, she grabbed Alaric and kissed him, and then admitted she wanted to do that while she still had an excuse. It’ll be interesting to see if she ditches her current beau for Alaric, because it seems like they’re forming a little love triangle of their own.