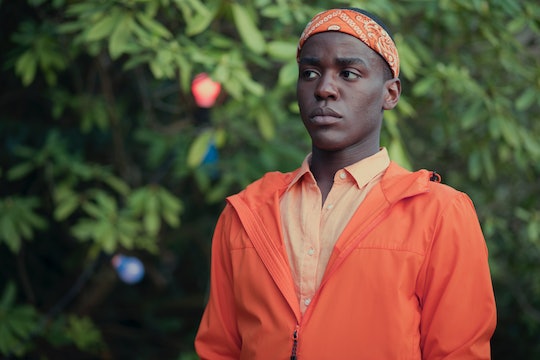 Ncuti Gatwa Is The Breakout Star Of 'Sex Education'

Sex Education generated a ton of buzz the weekend it dropped on Netflix for a few reasons. One: anytime Gillian Anderson digs into a new role, it typically sends TV fans into a tizzy. Two: the show's aesthetic combined the British sensibilities of all your favorite BBC faves with the retro 1980s vibe of Stranger Things. And, of course, it served up a story about teen sexual awakening with an inclusive twist. So viewers may be wondering who plays Eric on Sex Education, and with good reason. The eight-episode series is Ncuti Gatwa's first big break.

He's a classically trained actor who studied at the Royal Conservatoire of Scotland, but the experienced stage actor transitioned to screen work seamlessly in this role. It probably helps that he has a ton in common with his character, Eric, a queer high school student of West African descent with religious parents living in the, uh, less than cosmopolitan English countryside. Gatwa's parents are from Rwanda and he grew up in the U.K. and Scotland. As he put it in an interview with NewNowNext, it "wasn’t the most multicultural of places so I had a semi-tough time at school." And his own father worked in churches, so he knows what it's like to grow up before a religious backdrop.

As the best friend to straight-laced lead character Otis, played by Asa Butterfield, Eric provides a little comedic relief. He also infuses a show that centers on awkward teen boyhood with a big dose of femme energy, donning a flawless beat, statement earrings, and heels to prom, along with a custom suit made from Kente cloth. In his interview with Teen Vogue, Gatwa revealed there were actually two suits custom made for him in Ghana for the scene, and he found the whole experience pretty profound.

"I just died when I tried them on. I need these in my life, and so I'm gonna try and get them back and buy them," he gushed. "But they just fit so perfectly. Having clothes made in Africa when you've got an African body — normally I can't get jeans past my bum — it was just brilliant. It just fit everything amazingly."

One of the refreshing things about Eric as a queer character — particularly one from a religious background — is that his queerness isn't a source of major conflict with his parents. He's openly gay and they're mostly supportive, if worried for their son's safety. And even though Gatwa probably had a very competent makeup team taking care of him on set, he did go the extra mile and do a little method research into his role.

"I remember I went to Harvey Nichols in the U.K. and I spent an obscene amount of money on Fenty Beauty," he joked to Teen Vogue. "And I myself went home and did YouTube tutorials and learned how to do contouring and highlighting and concealer. Oh, my God, like all the things that... It's a whole world, it's like a whole world."