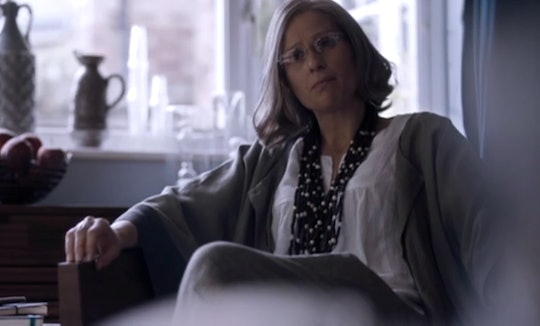 'Sherlock's Newest Character Is From The Stage

At the end of the second episode of Sherlock Season 4, titled "The Lying Detective," we learned about the existence of a third Holmes sibling. While Watson (and the rest of us) were assuming Mycroft and Sherlock's long-lost sib was a brother, Eurus upended that notion. At first, she manipulated Sherlock by disguising herself as the daughter of Culverton Smith and accompanying him on a midnight stroll. Then, she manipulated Watson by posing as his therapist. Finally, she revealed herself to be the third Holmes child, right before firing a gun at Watson. So who plays Eurus Holmes on Sherlock? Actress Sian Brooke and Benedict Cumberbatch have actually worked together before!

While she has a solid roster of British TV shows under her belt, Brooke remains a relative unknown stateside, and she certainly isn't a household name by any means across the pond. In fact, says series co-creator Mark Gatniss, that was a casting choice made on purpose. "This was a huge thing to cast Sian as Eurus," he told The Mirror in an interview. "We said to casting to find someone who should already be a huge star who has never had the breaks. It is an absolutely epic performance."

But part of Brooke's very successful stage career was playing opposite Cumberbatch himself in his 2015 production of Hamlet. Brooke played Ophelia, which means they've already shared countless hours of stage time together. It bodes well for their acting chemistry when they finally meet as brother and sister.

And although Brooke has been in every episode of Sherlock Season 4 thus far, she couldn't reveal her involvement in the production until now, since to do so would have given away that she was playing several characters in disguise. During the same interview with The Mirror, showrunner Steven Moffat joked, "She has been on TV for two weeks and now finally she is allowed to say she is in this show! She has even lied to her friends about what she was doing."

We still don't know how Sherlock and Eurus will meet as siblings, since he seemed not to recognize her as his own sister. There are a few different theories floating around as to how this could be — one of which involves the prediction that they were separated when either Sherlock or Eurus was a baby (they may even be twins!), which would account for why he doesn't recognize her. Mycroft is much older, so it would stand to reason that he knows who she is. And it seems all but certain at this point that she's either working with or behind whatever the Moriarty storyline is this season. Either way, it was a great reveal for the show and I can't wait to see where it all leads.