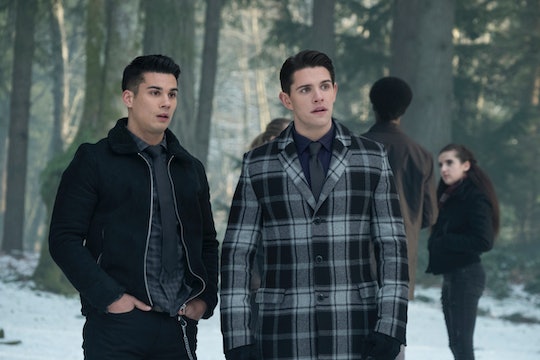 Here's What You Should Know About Fangs On 'Riverdale'

After a long winter hiatus, Riverdale is finally back, and fans are another week closer to uncovering the mystery of the Gargoyle King. This week, Fangs Fogarty is back in the spotlight, and it looks like he may have been hiding some crucial information from Jughead and the gang. Because the actor looks so familiar, fans are wondering, who plays Fangs on Riverdale?

Drew Ray Tanner plays Fangs on Riverdale, and you may remember the actor from some of his previous TV roles. Tanner played Jesse Reed on the ABC drama Somewhere Between and was also featured on a few episodes of Greg Poehler’s comedy series, You Me Her. The actor has been on shows like Supergirl, Arrow, and Supernatural, but Riverdale seems to be his most notable project to date.

Tanner grew up in Aldergrove, British Columbia, a small town near Vancouver, an in an interview with Terroir Mag, he revealed how his relationship with his grandfather fostered his love of performing as a child. “My Grandfather was a newly retired soldier from the Canadian army — he was a very high ranking officer, but to me he was never that army tough-guy,” said Tanner. “He was always my Pépère, which is French slang for Grandpa. He was always the guy doing magic tricks around the house and from a young age he would get me involved in them. I was crazy about it. I fell in love with the reactions on people’s faces when I would do a trick or perform with him.”

This passion for performance landed Tanner in numerous school plays, and he eventually turned it into an acting career. When speaking to the Daily Hive, Tanner discussed how he initially auditioned for the parts of Jughead, Reggie, Applejack and Sweet Pea, before finally landing the role of Fangs. “It was funny, I was approached for the Riverdale show in 2015, I had sent in a tape as Jughead, so I read for Jughead back then,” said Tanner. “I read for a bunch of parts —I was getting bummed out, I just kept on reading for the show, and nothing had seemed to stick.” But just as Tanner was about to read for the part of Nick. St. Clair, his agent told him that he was offered the role of Fangs.

Since then, it seems as if Tanner has fully immersed himself in his Riverdale role, and when speaking to Terroir Mag, he explained how he would like to see the character evolve. “I try to look at him with clear eyes and seek out new paths for him so that we don’t just see him as this kid in a gang,” he told the outlet. “Throughout season two I was always looking for things that he would be interested in and trying to see what he offers to the group.” Tanner added that fans should expect to see Fangs “do whatever is needed for the greater good” this season.

Does that mean he faked Joaquin’s death to save him? Well, the actor did leave one little clue on his Twitter page this week. Tanner shared a picture from the latest episode of Riverdale, in which he is sitting in a living room, desperately trying to discuss something. “I’ve got some explaining to do...tomorrow night! On #riverdale,” he captioned the photo. While this may or may not hint at Fangs coming clean about faking Joaquin’s death, the caption has fans hoping they’ll get to see more of their favorite Southside Serpent throughout the rest of Season 3.