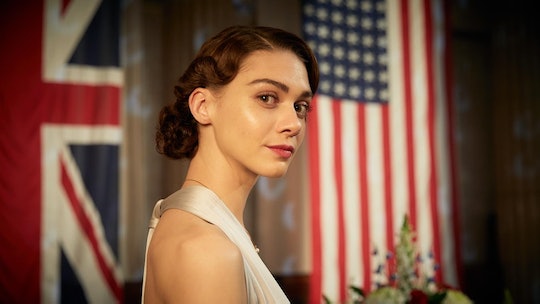 Emma Appleton Takes On The Complicated Lead Spy In 'Traitors'

Feef Symonds is a spy. She's also the protagonist of Netflix's upcoming period drama Traitors, a show that reimagines post-WWII England and its relationship with America. Feef chooses to spy for the States while working in the UK, putting her in a complicated and dangerous position. The actress in the role needs to do as much of a balancing act as Feef does to represent the many directions she's pulled in. So who plays Feef Symonds in Traitors?

Emma Appleton is the show's star. She's relatively new to the world of television, though Feef isn't her first role on the small screen. After taking part in the short Dreamlands, Appleton appeared in the series Clique, as well as an episode each of Granchester and The End of the F***ing World. She was in the show Genius right before landing Traitors, but she's also starting to branch out into film. According to IMDB, she had an uncredited part in The Nun and has another short film coming out soon called The Drink.

Acting wasn't initially how Appleton got into the business. In an interview with Cultured Vultures, she explained that she started modeling as a teenager, something she continued doing well into her twenties. But she told Balance that she always had an interest in acting.

While talking to Balance, Appleton said that performing and pretending had appealed to her since childhood; she had even considered applying to drama school before she found success with modeling. However, it wasn't creatively fulfilling enough for her. When she got the chance to be in Dreamlands, she "jumped at the opportunity without hesitation." Now just a few short years later, she's headlining her own series.

Appleton didn't think she'd landed the role in Traitors at first, though she described her chemistry read with co-star Luke Treadaway as a lot of fun. Feef had so much depth of character that Appleton had "a lot to get your teeth into and play around with," as she said to Balance. She continued to praise Feef in an interview with Schön!. Even though Feef was innocent in many ways and often got in over her head, she was still a strong character with a mind of her own.

"Feef is not really afraid of anyone telling her what she can and can't do. If someone does, she will retaliate," Appleton told Schön!. "She has an innate confidence which carries her quite far, but she is also very sheltered." There is always the possibility that Feef could be caught and exposed as a traitor, even though she's doing what she believes is right. On the show, the Americans are spying on the British to make sure they don't form an alliance with the Soviets. Feef is caught in the middle of all of it.

Traitors premieres on Netflix on Mar. 29 after debuting on Channel 4 in the U.K. in late February. The show is Appleton's first major starring role, but it seems like that matches perfectly with Feef's journey. They're both starting off in something new and weathering every challenge that comes their way.