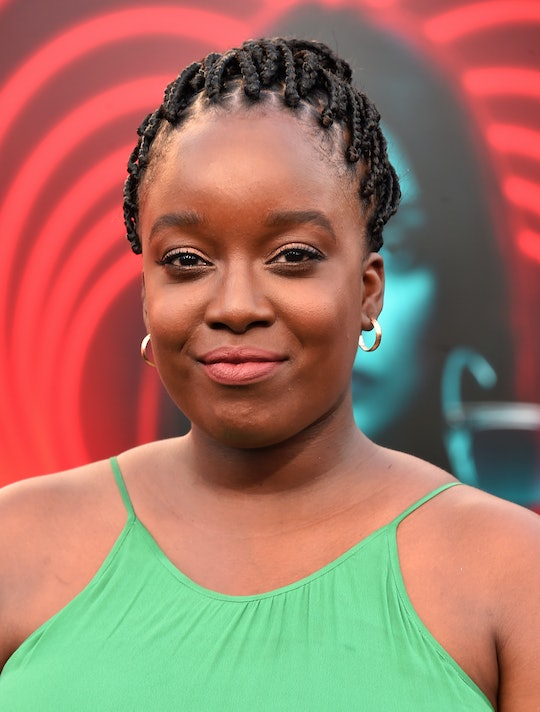 It's not hard to find a new favorite show these days. With the convenience of streaming services you can easily stumble onto any number of fantastic new obsessions. But among the most exciting of this season's new offerings, Shrill starring Aidy Bryant as aspiring journalist, Annie. Annie lives with her scene-stealing bestie, Fran, who's face is a little less familiar. So, if you're trying to figure out who plays Fran in Shrill, let me help you out.

Fran is played by British actress, Lolly Adefope, and you're probably not ready for her bold confidence. It's something to be admired, for sure, and stands up next to Bryant's fierce debut as leading lady in a body-positive series. In an interview with Cosmopolitan, Adefope said of Fran, "I come off confident, but I think if I met Fran, I’d be quite intimidated by her. She is unflappable and takes no sh*t." Shrill aside, Adefope's been in a number of shows and movies — you may recognize her from some familiar American projects such as Miracle Workers (on TBS with Steve Buscemi and Daniel Radcliffe), The Spy Who Dumped Me, Mission Impossible: Fallout, or Damned (plus a ton of other credits to her name). However she got her start on the British airwaves inTogether, Josh, Plebs, Rovers, Sick Note, Alan Davies: As Yet Untitled, The Last Leg, Don't Ask Me Ask Britain, and Taskmaster. Basically, she's been around longer than you may realize.

Adefope is best known for wildly outrageous characters you'll definitely remember, though. She told Forbes she originally had a different career plan saying, "I wanted to do standup, but I was too nervous,” she said. "I felt it was too vulnerable basically to be yourself on stage." She goes on to say she was inspired, after the Edinburgh Fringe fest, to write her first character in 2014, followed by a performance at an open mic that gave her the confidence to keep this thing going. That eventually morphed into other characters and other roles. "Most of the stuff that I've done [in America], I've done in a British accent so it doesn't feel like too much of a leap in terms of what I'm already doing in London really," she added in the same Forbes interview.

Shrill is a six-episode series set in Portland and was adapted from the bestselling 2016 memoir by Lindy West, Shrill: Notes from a Loud Woman, a collection of essays about West's career,and how she took on the troubles of social media (i.e. trolls). As described in Deadline Shrill is about an aspiring journalist looking to change her life but not her body. Bryant is a writer on Shrill, along with other familiar names, Elizabeth Banks and Lorne Michaels.

While Adefope is a relative newcomer in America, she's hustled her way towards the top in a short amount of time. In the role of Fran, Adefope balances Bryant's girly optimism with a bit of tough love and irrepressible sass. If you haven't yet heard of Shrill, redeem yourself now. Something tells me Adefope's reign has only just begun and you're right at the forefront of the awesomeness. Lucky you.