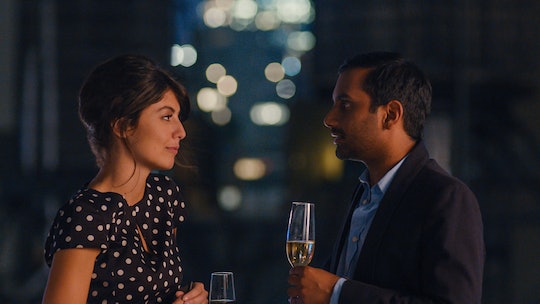 Francesca In 'Master Of None' Is Already An Italian Star

The second season of Master of None begins with Dev three months into his Italian pasta-making adventure in Modena, Italy. He's already mastered some of the language and has a little apprenticeship making pasta with the nicest family ever — including a woman his age named Francesca, who even lets Dev hang out with her and her friends. She's Italian, but speaks some English. So who plays Francesca in Master of None? As the season goes along, it's easy to tell that she's going to be a household name very soon.

Francesca is played by Alessandra Mastronardi, who is already pretty famous in Italy. You might even recognize her from some American movies, like Woody Allen's To Rome, With Love, the movie Life with Robert Pattinson, and the television series Titanic: Blood and Steel. When we meet Francesca in Master of None, she's just Dev's friend, as the granddaughter of the woman who gave him the pasta-making gig. She's also currently in a serious relationship with someone else, but as the season progresses, viewers can tell there's a bit of a spark there between her and Dev. When Dev asks her advice about getting back with Rachel, things start to get complicated, and he and Francesca will probably end up getting closer and closer as the season goes on.

Back when she was doing To Rome, With Love, Mastronardi said that she was happy to take both American and Italian gigs. She said in an interview:

Although Francesca seems like a quiet, "nice" girl, Mastronardi is a little more adventurous. She said in a recent interview with Donna Moderna that she she's cheated on boyfriends in the past (but always confessed afterwards), had sex in public, and tried marijuana, but wasn't really into it. Mastronardi said that she always liked the smell of weed, but not being high.

The actress also doesn't care what anyone says about her. In Italy, some critics said that she always has the same expression on her face. But Mastronardi doesn't let that kind of basic criticism get to her. She said, "I hope that's not true. But hey, the job of the critics is to criticize, otherwise what would they do?"

With that attitude, and the great role in Master of None this year, Mastronardi will definitely go far.