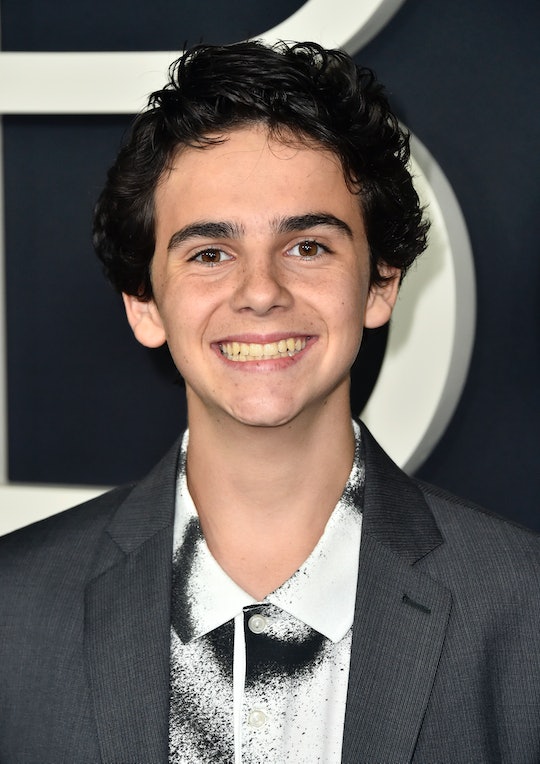 Meet The 15-Year-Old Star Behind Freddy Freeman In 'Shazam!'

Who doesn't love a good superhero movie? But, personally, there's something I love even more about these kinds of flicks. And that's when our favorite hero has a good buddy — it just seems to round out the movie and lend another dimension to the character. I’m talking Alfred to Bruce Wayne, Ned to Peter Parker, and in the upcoming Shazam!, we’ll get to see the character of Freddy as the sidekick of Billy Batson. But who plays Freddy Freeman in Shazam!? Jack Dylan Grazer may be young, but he’s already racking up some pretty impressive acting credits.

If Grazer looks familiar when you first see him onscreen, you may have caught him previously in the movie that was his breakthrough, the 2017 horror film It. Though Grazer had a few TV roles prior to his appearance as Eddie Kasbprak, his role in the Stephen King story is what brought him widespread recognition.

Grazer followed that up with a role on a short-lived TV series called Me, Myself and I and then a role in the critically acclaimed Beautiful Boy as a younger version of Timothée Chamalet’s character. His role in Shazam! comes just ahead of his reprisal of the role of Kasbprak in It: Chapter Two, according to his IMDb page.

Check out Grazer in the trailer for Shazam! He’s shows up around 28 seconds in when he greets his new foster brother.

Grazer told Glass magazine that he always knew he wanted to be not just an actor, but an accomplished one. “As far as I can remember I’ve always had the aspiration to be a talented actor," 15-year-old Grazer told the outlet. "As a young boy being on stage performing or making up characters in the mirror just gave me the absolute feeling of freedom and happiness. So that’s when I officially decided that this is what I wanted to continue to do for the rest of my life."

And a bug for the business runs in his blood. Grazer is the nephew of uber-successful producer Brian Grazer of Empire, 24, The Da Vinci Code, Apollo 13, and scores more, according to Young Hollywood. His success comes all on his own, though, and has earned him legions of fans, including 2.4 million Instagram followers. There he posts self-deprecating moments from events and photo shoots, Shazam! promotional clips, and lots of skateboarding videos. In fact, the first thing he bought when he started earning money from acting was a new skateboard, according to The Hollywood Reporter.

Grazer spoke to Entertainment Tonight Canada about Shazam!, the story of a 14-year-old boy in the foster care system who is given adult super powers (and an adult appearance) by a wizard. All he has to do to access the powers is say the wizard’s name, Shazam. The actor told ET that the best thing about the film is the character’s enthusiasm over his situation: "He’s so stoked about being able to be a superhero. He’s not dreading having to go save the world, this is a dream come true for any kid."

Grazer’s life is probably a pretty good dream come true for a lot of kids, too. Look for him starring alongside Asher Archer and Zachary Levi in Shazam! hitting theaters on Friday, April 5.