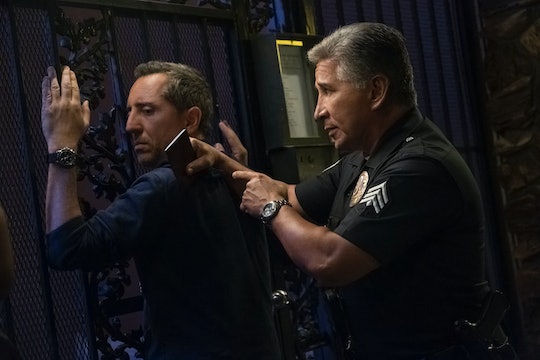 Gad From 'Huge In France' Really Wasn't Kidding About That

Huge In France is not just the name of a new show on Netflix premiering April 12. The show is a comedy based on someone's life. So you need to know who plays Gad in Huge In France. Because if the trajectory of Netflix shows is any indication, he's about to be huge in the US. Plus, if you go to France and want to see a funny movie, it will be comforting to know the name of the face that's making you laugh.

His name is Gad Elmaleh, and he's Europe's answer to Jerry Seinfeld. He's acted in a love of funny movies there and he dubbed lines for Seinfeld's character when Bee Movie was released overseas. The two then became friends and Elmaleh is in an episode of Seinfeld's Netflix show Comedians İn Cars Getting Coffee. Elmaleh also does some standup, which is more popular in France than in his home country of Morocco.

Elmaleh told Vanity Fair in 2016 that watching videos of comedians like Seinfeld and Chris Rock helped him recognize his life's dream. "I realized that's what I want to do," he said, "I want to talk directly to the audience."

Huge In France chronicles what life is like when you're famous in one area of the world and then move to another and try to replicate that success. Spoiler alert: fame doesn't always happen overnight and Elmaleh doesn't mind at all. "I’m starting over here, which feels great," he said. For example, he described a walk to work in New York versus in Paris, where he is, you know, huge. “No entourage, no driver, no security, no nothing. Just my Eastpack backpack and a Sharpie. I love being anonymous, being in a place where no one cares.”

In a way, anonymity makes his work a lot more fulfilling. "When Americans, who have no idea who I am, laugh at my jokes, it’s exactly the same if someone loves you even if you’re not rich and famous," he said in Vanity Fair. He clarified, "Which is, of course, something I hope I never experience.”

In case you've missed the point, Elmaleh is really, really huge in France. He has a son with Charlotte Casiraghi, the granddaughter of Princess Grace of Monaco (to clarify, that's American actress turned Princess Grace Kelly.) So in my mind, that means he's close enough to royalty that it's completely fine for him to question American customs like public proposals — and also funny.

“I was in a steak house once and someone proposed," he said. "I was so embarrassed. The woman started crying, and I thought, She was just proposed to in a steak house—I’d be crying, too." (I always wonder why people propose in public, too! Like, give someone the chance to say no!)

Since breaking up with Casiraghi, Elmaleh also has trouble translating American dating/emoji speak. "I wrote to a girl, ‘Want to get a drink?’ And she responded, ‘Why not?’ and then put the emojis of the Spanish dancer, handbag, plane, firecracker, monkey covering his face, champagne, and an eggplant. I didn’t know what to do." I wouldn't, either, dude. (For the record, he went with an ambulance — solid choice.)