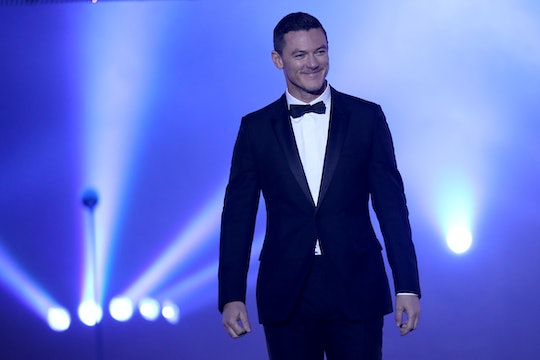 He's the man everybody loves to hate in Beauty and the Beast. Luckily, the actor who plays him in the 2017 version of the movie has, according to most critic reviews out there, nailed the role. The Girl on the Train actor Luke Evans plays Gaston in Beauty and the Beast, the latest live-action fairytale to hit the big screen, and in it, he plays a goofy, self-centered Gaston whose personality shines throughout the film.

According to Beauty and the Beast director Bill Condon, Evans was made to play Gaston. "Here’s the thing about Luke Evans," he told Pop Inquirer. "He has all the qualities that are right for Gaston but he has this other thing which comes from years of working on a stage and which is so important to have in a movie musical, and that’s the joy of performing. This is a role he was born to play."

Evans himself told Pop Inquirer that he found Gaston's personality an easy one to play with. "Gaston doesn’t see the world the way everyone else sees it. He’s at the top of the pyramid and everyone else is below him," he said. "He thinks he can do no wrong and does not understand why Belle does not want to be his wife. I mean, God, is she mad? Is she blind? Is she stupid? He doesn’t get it, which is funny in and of itself, so I really tried to play up the comedic aspects."

Evans started his career in musical theater before moving into more traditional acting roles. He's now starred in several Fast and Furious films, played Bard in The Hobbit series, and acted in The Girl on the Train, Dracula Untold, and The Raven.

When it came to auditioning for Beauty and the Beast, Evans told Jimmy Kimmel that he was pretty sure he had the part locked down. "You go into these auditions and you’re always feeling very self-conscious but this one I knew I could do it," he said. He had to belt out "Gaston" during the audition while sitting steps away from Condon. "I was like, 'I can sing this track [and] I'm going to blow him away.'"

Mission accomplished, if the Beauty and the Beast reviews that have come out so far are to be believed. According to Hunter Harris, associate editor at Vulture, "[Evans'] human Gaston is all the best parts of the cartoon version, fully realized."

Beauty and the Beast is now in theaters, where viewers can go check out the upgraded Gaston on the big screen.