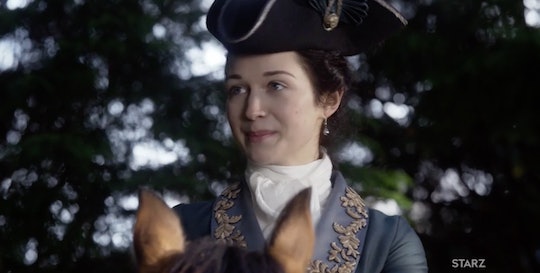 Geneva Will Play An Important Role On 'Outlander'

Season 3 of Outlander is taking audiences to places it hasn't taken them before. Namely, places outside of Scotland, for better or worse. It is also introducing some new characters eagerly anticipated by book fans, including yet another strong-willed young, 18th century woman named Miss Geneva Dunsany. So who plays Geneva on Outlander? The actress is Hannah James, and rest assured she knows her way around a petticoat, though to many she may be an entirely new face altogether.

The third installment of the sprawling Outlander series takes our beloved main character Jamie to a place called Helwater, where he serves a noble family called Dunsany as their groom. The third episode saw Jamie's captor/new best friend Lord John Grey send Jamie to the estate rather than having him shipped off as an indentured servant to the Colonies because the two bonded against all odds while they were both at Ardsmuir prison. Warning: minor book spoilers ahead!

While at Helwater, Jamie will forge more unlikely bonds with the people who live there, particularly the young and beautiful Dunsany daughters, Geneva and Isobel. Because Jamie has this effect on literally everyone he encounters anywhere ever, one of the daughters, Geneva, becomes infatuated with the large, brooding Scottish groom. As you might imagine, things get complicated from here.

The character of Geneva clearly has a very strong will of her own. While this is generally thought to be a good thing in today's world, it wasn't viewed quite so favorably in a woman in the 18th century. In that world, women, especially nobility, were generally expected to be docile and quiet and wait patiently to be married off to a man with the right sort of family name and money, produce children, and entertain guests. Geneva is not that sort of character. Hannah James, who plays the part, has experience acting as a strong woman in a time when women were expected to be weak.

James is a relative newcomer to television, with only one major credit under her belt. She played a lead character in the PBS Civil War drama, Mercy Street. James portrayed Emma Green, who started the series as the very picture of a Southern Belle — demure, coquettish, and privileged — but quickly turns away from the expectations of her family and forges a life of her own, namely by volunteering at the war hospital and meeting people who help change her aspect on life.

And that's exactly the type of trail-blazing persona James's Outlander character has, in that she'd much rather make her own decisions rather than have everything decided for her by a man.

But as far as James' own upbringing, it appears it was not quite as fancy and conservative as her recent acting gigs would suggest. According to her IMDB bio, James had a pretty interesting childhood that certainly did not take place in a manor house. She was apparently raised for the first part of her life on a farm in Virginia by her American father and English mother. She was homeschooled until the age of 10 and then sent to an all-girls Quaker school. Fresh out of drama school, James booked Mercy Street and the rest is history.

In the books, the interlude at Helwater with the Dunsany sisters is very short. While Geneva's role is vital to the coming action, it isn't a very drawn out affair. So it is possible that James will only appear in Outlander for a single episode, or perhaps two. In this case, I hope she makes the most of it!