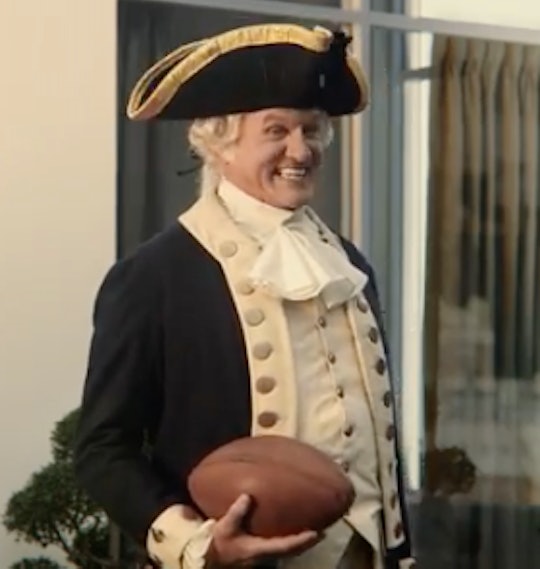 Who Plays George Washington In Apartments.com Ad? It's Not That Exactly Clear

Lil Wayne is back — and he's coming for the Super Bowl. Well, sort of. Weezy F. Baby and Jeff Goldblum are starring in Apartment.com's one-minute Super Bowl ad — but they're not alone. The twosome are joined by the Founding Father himself, George Washington (but, uh, who plays George Washington in the Apartments.com ad?), in what might probably go down as the most interesting commercial of Super Bowl 50. Dubbed "The Arrival," the ad reportedly cost $10 million, according to the New York Daily News, and it features Goldblum reprises his role as the Silicon Valley Maverick "Brad Bellflower" character, singing "Movin' On Up," which ties in perfectly with the brand's hashtag for the commercial, while soaring past apartments in downtown New York City. Billboard.com also says that the "Movin' On Up" song choice is a nod toward The Jeffersons show. Come to think of it, entire commercial is flooded with imagery from The Jeffersons show.

Obviously Goldblum and Weezy are stars recognizable on first glance, but even though everyone knows the Founding Father when they see him, there isn't a ton known yet about the actor portraying him in the Super Bowl commercial. I mean, he's like, arguably one of the most important figures in American history, but when paired up against Goldblum and Lil Wayne, who's really asking who the dude with the outdated white hair is? (Judging from the fact that most don't yet know who the actor is portraying him even is, I'd venture not many.) Unsurprisingly, with all the imagery going on, Washington's character is a play on The Jeffersons' main characters, George and Louise Jefferson, according to Billboard.com.

Becky Carr, CMO of Apartments.com, spoke with Ad Week and said that the plan for the Super Bowl add was "a little bit different" given that their data shows more Americans are renting rather than owning. Said Carr, "It really is about celebrating apartment lifestyles. I think the commercial talks about the joys and excitement of moving on up into a new apartment."

Even though there isn't much to go off of when it comes to who's playing Washington, there was lots of discussion on whether or not the fact that Weezy is cooking for Washington is racist in the Apartments.com ad, given that Washington was a notorious slave owner.

However, a source close to Lil Wayne reportedly told TMZ that he felt cooking burgers for George Washington in the commercial was meant to be "funny and silly and not the least bit racist." As the ad gains more and more attention (and the Super Bowl, airing Feb. 7) draws closer and closer, it's only a matter of time until we know which actor, exactly, is portraying the first president of the United States.

Turns out the mystery George Washington is actor Bart McCarthy! McCarthy was in the The Spongebob Squarepants Movie, and Oz the Great and Powerful. But it's totally fair to say that his most historic role was portraying George Washington, in the company of Weezy F. Baby and Jeff Goldbum, no less.