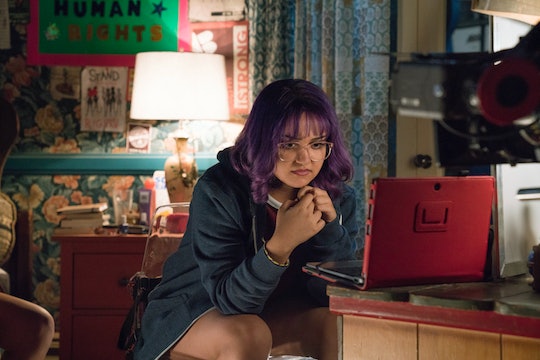 Hulu's latest series brings a new group of superheroes to the small screen. Marvel's Runaways follows a group of teens who discover their parents are part of a villainous group called The Pride. One of the teens is Gert Yorkes, a purple-haired girl who has a pet dinosaur. (Yep, you heard me.) So who plays Gert Yorkes on Runaways? Ariela Barer plays the intriguing character.

The 19-year-old was discovered at the age of 10 when her now-manager saw Barer and her sister in a play at a local children's theater group. Since then she's appeared in a number of TV shows, including Yo Gabba Gabba!, ER, 90210, Valentine, Weeds, Keenan's Crush, and Modern Family. She also popped up in a number of popular Disney Channel shows like Liv and Maddie, K. C. Undercover, and I Didn't Do It. Additionally, you may have seen her as a Young Cece on New Girl or in her recurring roles on the Netflix series One Day at a Time and Atypical.

Barer has done a few movies as well, including King John, All Kids Count, Stellina Blue, and An American Girl: Chrissa Stands Strong. Following Runaways, you can see Barer in the short film, A Place I'd Like to Be.

Besides acting, Barer also plays bass in the feminist rock band The Love-Inns. The band includes Eden Hain and Mack Kenny, and their band name comes from the "love-ins" of the 1960s, which were peaceful gatherings and protests against social and environmental issues. The group released their first album, SPLIT LIP, in June on Band Camp. By releasing the album this way, fans got to choose how much they wanted to pay for the album, beginning at just $1, so there's no reason why you shouldn't check it out. Plus, I hear it's pretty freaking good.

When she's not acting or singing, Barer is fighting the good fight. A proud and out feminist, Barer consistently takes to social media to let her voice be heard and also participates in marches and other forms of activism. In this way, Barer is very much like her character, Gert, whose main goal in life is to make a difference in the world and take down the patriarchy. Barer revealed to Remezcla that although she first auditioned for the role of Molly Hernandez, the youngest Runaway, when she read for Gert she felt like the character was the perfect fit for her.

"I looked up the character before going in for the screen test and got so excited," she said. "[Gert] is someone I relate to completely. She's exactly who I was when I was 16. I felt immediately connected to the character and was able to let all my insecurities go out the window. It was so liberating, which is exactly who Gert is as a character... It was so perfect."

Barer also revealed how happy she was to play such a relatable character who is still such a strong woman. After getting the role, Barer continued her research on the role, running to the comic book store to grab the first two issues of the Runaways series. Quickly falling in love with it, she ended up reading the first issue 10 times. As for the show itself, she described it as being "an entirely new thing" that will have "lighter moments, but also ventures into darker places."

It definitely sounds exciting and I can't wait to see it. Thankfully, the wait is over and you can now watch the first three episodes on Hulu.