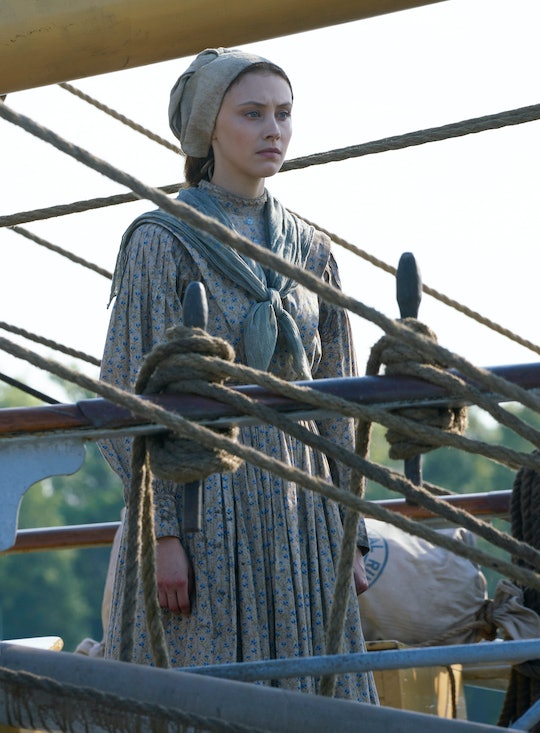 One television trend that I can absolutely get behind is adapting Margaret Atwood novels into smart, bingeable, female-driven shows. Like Hulu's The Handmaid's Tale, Netflix is adapting another Atwood book also focused almost entirely on one woman and her internal life. So who plays Grace Marks on Alias Grace? Sarah Gadon is the actor responsible for the huge challenge of playing this beguiling character. Personally, I can't even imagine trying to shoulder that kind of project for Atwood, who is one of my personal literary heroes.

Alias Grace is based on the real story of Grace Marks, an Irish immigrant who came to Canada in the 19th century before she was accused and convicted at age 16 of murdering her employer, Thomas Kinnear and his mistress. She was accused along with fellow servant, James McDermott, who was hanged for the crime. Marks spent nearly 30 years in prison, but claimed to remember nothing of the murders themselves. The novel, and now the series, explore what is actually going on inside Grace's head, and poses the question of whether she was an unwitting pawn or the mastermind behind the whole thing. In what is clearly a very challenging, slippery role, early reviews of the show say that Gadon is excellent as the main star.

Though you may not recognize her face, the 30-year-old actor has been working consistently for the past 20 years. She was born in Toronto, Canada, and has been working as an actor since the late '90s at least, when she was still a young kid. According to her IMDB profile, one of Gadon's earliest roles was in my favorite childhood TV show, Are You Afraid of the Dark. Of course, that's not exactly her most impressive or well-known title. Gadon has also been in several major movies and TV shows, though this is the first time she is helming a show entirely about her character. Some of the biggest movies Gadon has been in include The Amazing Spider-Man 2, Dracula Untold and A Dangerous Method, which was about psychologists Sigmund Freud and Carl Jung.

In discussing her role in the series, Gadon expresses the difficulty of portraying Grace Marks, as pretty much every scene revolves around her and only her. "The role was grueling," Gadon said to the New York Daily News. "Physically, emotionally and intellectually. It stayed with me for months after the shooting, which was nothing like I’d ever experienced before. I think I’m still coming out of it." Ambiguity over whether or not Grace is guilty is vitally important to the story, which is what it is Gadon's job to communicate. No wonder she thought the role was grueling.

It is central to the story and how it is presented that the audience doesn't know whether Grace is making everything up or whether she's telling the truth. In an interview with Toronto Life, Gadon talks a little bit about how she went about toeing that line. "I think ambiguity is really important to the book and to the show, but of course as an actor, you can’t just suspend yourself in a state of ambiguity," she said. "I had to make choices about whether I thought she was innocent." But don't expect her to admit to anything. "Margaret gave us all our marching orders before we started press. She said, 'You cannot tell, you cannot ruin it,'" Gadon explained.

I'm still trying to imagine being on a first name basis with Margaret Atwood and finding it really difficult. I was already going to be among the first people to hunker down and binge watch this show because I love Atwood more than anything and I am a sucker for dramas with petticoats. But now that I know a little more about the show's lead, I'm even more excited for this new Netflix series to come out.