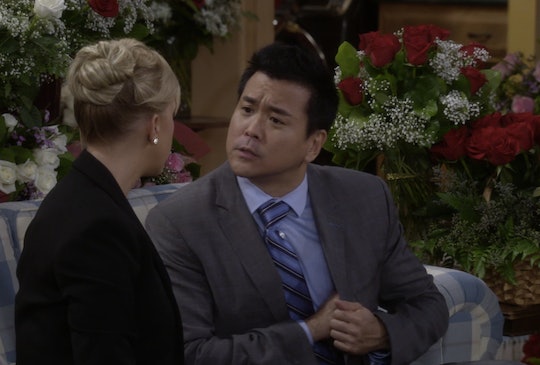 Who Plays Harry Takayama? Stephanie's Old Boyfriend Is Back On' Fuller House'

There are a lot of inside jokes and throwbacks to the original series in Netflix's Fuller House, but the sweetest by far is the flashback to Stephanie and Harry's holy "mattress-money" way back when. So who plays Harry Takayama all grown up?

Well, I hate to disappoint, but it's not Nathan Nishiguchi, the child actor who originally played Steph's adorable beau. It's not. Instead, Michael Sun Lee plays the current-day Harry and he's pretty perfect for the part.

Lee has done lots of appearances on many shows, including The Fosters, NCIS: Los Angeles, and Days of Our Lives, among others. According to his IMDB page he's originally from Oahu and has been in the business ever since he started acting in college. And if you thought you were looking forward to Fuller House, Lee has been active on Twitter promoting the show. He seemed just as ready for the release as anyone else. His take on adult Harry is a perfect homage to the classic Full House episode where he and Stephanie get "married."

Fuller House works in part because they give the adult women some (semi) realistic plot lines. In episode nine, Becky brings Harry back after Stephanie reminisces about how she loved Harry as a kid and missed having that kind of connection with someone.

For rookies, they even flashback to the backyard wedding and yes, it's as hokey as you remember it being. So is adult Harry. He's now an accountant, so Stephanie puts on her best business casual for their meeting. Luckily, he's only interested in inviting her to his upcoming wedding. It's lucky that he and Stephanie are no longer soulmates. In the spin-off, she's a world traveling, spontaneous, all-nighter kind of girl. She's a famous D.J. and goes to Coachella. There's nothing wrong with business casual, but it's definitely not her style. Lee is great as Takayama but it's a good thing he doesn't stick around for the rest of the series. Stephanie is living her best life and it would be a shame to tie that down.

For what it's worth, Stephanie's character avoids a lot of "single girl" tropes you usually find on sitcoms. She's successful (though a little broke, but who isn't sometimes?), dedicated to her family, manages to date major league baseball players, and is the unofficial queen of dad-jokes and bad puns. That's a lot of personality.

Her and Harry may have been too cute back then, but they're better off apart. It's too bad for Lee if he was looking for a longer gig, but some relationships aren't supposed to last.