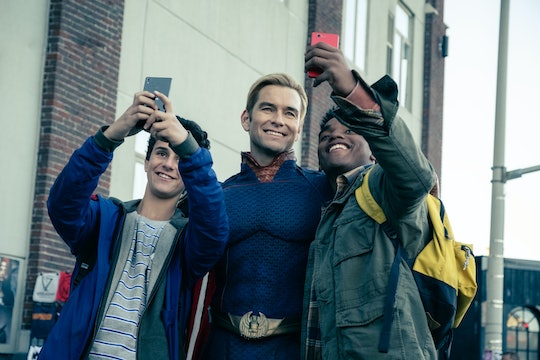 Antony Starr Is A Big Bad Superhero On 'The Boys'

Amazon brings a new breed of superheroes to life with its new series, The Boys. Premiering Jul. 26, the show is centered around a a group of humans who set out to take down corrupt superheroes. The series includes some stellar performances, especially from the main hero/villain of the story. So, who plays Homelander on The Boys and where have you seen him before?

Antony Starr takes on this fascinating role, and if he looks familiar to you, it’s probably because he’s been on a few popular TV shows over the years. The New Zealand born actor is best known for his leading role on the Cinemax series Banshee, in which he played ex-con Lucas Hood. He also starred in the CBS drama American Gothic in 2016, taking on the role of Garrett Hawthorne. Outside of these American television series, Starr has worked on a number of Australian shows and films, including the award-winning comedy crime drama series, Outrageous Fortune.

The Boys is based on a New York Times best-selling comic written and illustrated by Garth Ennis and Darick Robertson. In it, Starr plays the character of Homelander, an egomaniacal superhero with the look, strength, and abilities of a traditional hero, but with none of the integrity or morals. He is the leader of the Supes of the Seven – a superhero group including Starlight (Erin Moriarty), Queen Maeve (Dominique McElligott), A-Train (Jessie T. Usher), The Deep (Chace Crawford), and Black Noir (Nathan Mitchell). A group of humans, who call themselves The Boys, decide they’ve had enough of the Supes corrupt ways, and work together to expose their truth to the world.

In an interview with the New York Post, Starr talked about his character and how he compares to other comic book superheroes. “[Homelander is] basically an inversion of Captain America meets Superman … and add a big dose of craziness,” he explained. “Superhero culture is everywhere at the moment. You can’t help but be influenced by that, but our show is so different. Take Superman or Thor or any [superhero] and they always do the right thing. So basically the task was take anything that looks like the right thing to do and turn it on its head — and then you’ve got my guy.”

He also pointed out that the show is multi-layered, featuring the thrill and fun of a superhero adventure, while taking a critical look at the power of celebrity.“There’s a definite political and social satire going on within the show, but it’s also just so much fun,” he told the outlet. “So if you want to get deep on it, you could pick it apart and look at metaphors to the cultural environment of our times. Or, you can just have fun. I like shows that work on both those levels. It’s an ‘everyone’s invited’ environment.”

This role is far different from anything Starr has done in the past, but if The Boys ends up with future seasons, he may just have to get used to the idea of wearing a cape and tights.

The Boys is currently streaming on Amazon Prime Video.

More Like This
Kim Kardashian Stars In Hilarious House Of The Dragon Parody, The Targashians
Lifelong Teacher Dr. Jill Biden Loves Watching Abbott Elementary Too
10 Parenting Lessons From Abbott Elementary That You'll Want To Write Down
The Office Halloween Episodes: A Definitive Ranking