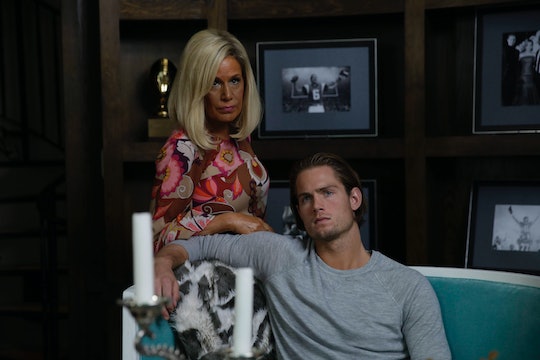 Hunter Could Start A Love Triangle On 'Star'

Lee Daniel's new musical drama, Star, is already filled with twisted storylines. The star of the show, Star, has already shown she's willing to do whatever it takes to get herself and her sister Simone and her friend, Alexandra, a record deal. That included going to a strip club to sing for manager Jahil Rivera, who clearly has more than just a musical interest in Star, but he's not the only one. His godson, Hunter, was also caught up in Star's spell when she performed at his house and there's no doubt this will cause conflict later. So who plays Hunter on Star? Chad James Buchanan landed the role of the rich football hunk.

Though this isn't Buchanan's first television role, it seems to be his biggest one yet. In the past he's been cast in popular shows like The Glades, Glee, Grey's Anatomy, Awkward, Jane the Virgin, and Mary + Jane. But typically he only appeared in these projects for one or two episodes. It's unclear how long Buchanan will be sticking around on Star, but based on what fans have seen so far, it definitely feels like there's potential for him to pop up consistently as one of Star's potential love interests.

Besides being Jahil's godson, Hunter is also an NFL player, hence why he was having a big party at his house that included musical performers. Although fans saw Star get cozy with Jahil earlier in the episode, Star wasn't opposed to flirting with Hunter as well and making eyes at him and Jahil when the group performed. As Star herself said, she's trouble, and Hunter didn't seem all that thrilled with the way she was dancing on his godfather. It seems Hunter wants Star for himself, but what he doesn't seem to realize yet is Star will do whatever and whoever she wants.

If Star's not careful though she could find herself in the middle of a love triangle that could mess up the group's chances for fame. Although Jahil is interested in working with the group, he's still a failed manager trying to make his way back to the top. There's only so much he can do for the group. Meanwhile, as a NFL player, Hunter probably has connections that could help the group find success, or at least more gigs, if Star knows how to take advantage of it.

It'll be interesting to see how this all plays out. No matter what happens, I hope Buchanan sticks around for a while. Besides the fact that Hunter adds to the drama, he's also really nice to look at it.