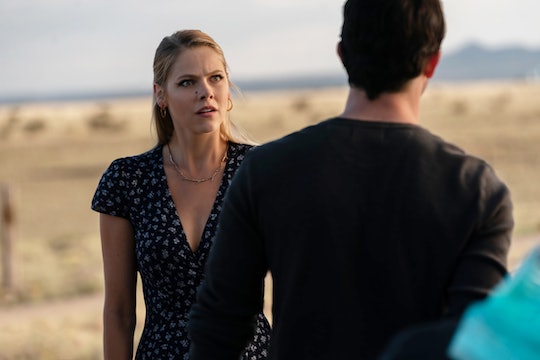 Here's Everything You Need To Know About Isobel On 'Roswell, New Mexico'

One of the most exciting characters on CW’s new series, Roswell, New Mexico, is lsobel Evans-Bracken, an alien who is just trying to live a normal human life. After crash-landing in Roswell with her alien friends and family, she assimilated with the human population, got married, and became a lawyer. The actress in the role may look familiar, so viewers are wondering, who plays Isobel on Roswell, New Mexico?

Lily Cowles is an American actress who is known for her recurring role as Germaine Healy on the CBS comedy, BrainDead. She had been featured in a few TV shows and films over the years, including Enchantments and Jones vs. the World. If her acting chops make her seem like a born natural, that’s probably because she is. Her mom is Emmy award-winning actress Christine Baranski (The Good Wife, The Big Bang Theory) and her father was actor/playwright Matthew Cowles.

On Roswell, New Mexico, Cowles plays the alien, Isobel, who is committed to keeping the existence of her alien community a secret. When talking to Town & Country Magazine, the actress revealed that it was Isobel’s complex personality that attracted her to the role. “Isobel is full of contradictions,” said Cowles. “She is very tough and appears to have everything together, and yet it's a hollow facade. What was fascinating to me about Isobel is she knows what she is not, but she doesn't know what she is. That has to be such a crazy psychological position to be in where all that she knows is that she's not human, and she's doing her best impression of what a human is.”

In her cast interview for The CW, Cowles described her character as a reformed former high school “ice queen” whose alien powers keep interfering with her human lifestyle. “This is complicating for her, because she has a marriage, she’s got a job, she’s got a whole life in place and she’s trying really hard to keep it all together, but it’s starting to fray at the edges,” she said. “She’s sort of like Wendy to the Lost Boys with her brothers. She really keeps them all together. It’s her job, she feels, to try to keep this unit together still, and she really struggles with that.”

Isobel is in love with her human husband, Noah Bracken (Karan Oberoi), but she can’t tell him about her alien identity. She has two brothers — her biological brother Max Evans (Nathan Dean Parsons) and adopted brother Michael Guerin (Michael Vlamis) — who live in Roswell with her. Max is the town’s deputy sheriff, while Michael often finds himself in trouble and on the wrong side of the law. In order to save the life of his new love, Liz Ortecha (Jeanine Mason), Max uses his alien powers, and unintentionally exposes his alien community’s existence. Knowing that something supernatural is a foot, Liz begins to question the circumstances of her sister Rosa’s death, but her interest in the aliens’ existence has Isobel on high alert.

In the trailer for the Episode 5, titled “Don’t Speak,” Isobel wakes up in the middle of the desert, and she doesn’t seem to know how she got there. She was living a seemingly perfect life until Liz came to town, but it looks like things are going to keep getting weirder for her as the season continues.