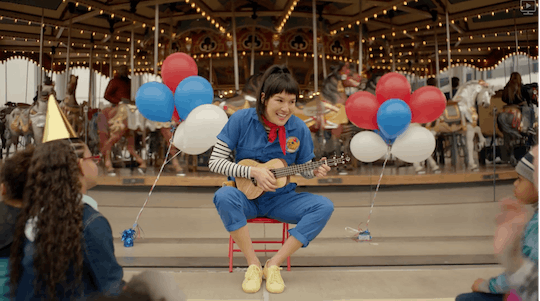 Here's Where You've Seen Isobel From 'Strangers' Before

Strangers has returned to Facebook Watch for a second season this summer after its wildly popular debut at the Sundance Film Festival. The series, loosely based on creator, director, and writer Mia Lidofsky's life, follows a woman named Isobel as she navigates her evolving sexual identity and pursues a fledgeling career as a writer. Given the show's rising profile, viewers may be wondering: who plays Isobel on Strangers? Zoë Chao is actually a lifelong pal of Lidofsky's (they met in nursery school!), but she has some recognizable TV credits to her name, too. In 2014, she had a recurring role on HBO's The Comeback, starring Lisa Kudrow, where she played an assistant director named Shayna on Valerie Cherish's fictional series Seeing Red. Chao has also had guest spots on Hart of Dixie and Rizzoli and Isles, but her work on Strangers is by far her most recognizable.

The Facebook Watch series, which was produced by Refinery29, first premiered at Sundance in 2017, and Facebook acquired it for its in-house streaming platform a few months later. The first seven-episode season premiered last fall and, following its success, Facebook announced that the series had been green-lit for a second season, which kicked off earlier this summer. Plus, the show went from a 15-minute web series episode format to an extended half-hour comedy format, fleshing out the storyline even more.

Between Seasons 1 and 2, Isobel and her best friend Cam (played by Search Party's Meredith Hagner) decide to move from Los Angeles to New York. The first season begins when Isobel's boyfriend learns she cheated on him with a woman. The pair break up and he moves out. Unable to cover the rent on the apartment they shared by herself, Isobel decides to put the extra bedroom on Airbnb. Thus, a rotating cast of strangers (see what they did there?) enters and exits Isobel's home, each teaching her something poignant during the brief but intimate time they spend together.

It's a solid premise but Season 2 obviously needed a shakeup. So, Isobel's shady Airbnb dealings wind up costing her the apartment and, homeless, with a confusing new sexual identity to grapple with, Isobel decides to switch coasts. She moves to New York with Cam, and although they initially plan to move in together, a merry-go-round of truly appalling apartments later, they're forced to regroup. Cam winds up falling in with a group of trust-fund artists, scoring a spare room in their posh loft. (Of course she does.) Isobel, meanwhile, does a little role reversal and goes from being an Airbnb host to a guest, opting to surf through shared housing full-time instead of finding an apartment. (Hey, they needed someway to maintain the premise!)

Much of Isobel's appeal as a character is that she's a queer woman of color at the center of a series. (Chao is bi-racial, with a white mom and a Chinese dad.) Although Chao doesn't identify as bisexual herself, Lidofsky is queer-identified and Chao appreciates the authenticity her friend writes into the role. "I had a lot of apprehension about playing someone who is bisexual," she told NBC News in an interview last year. "But Mia is a gay woman and a gay filmmaker, and I trusted her vision."

Plus, she has plenty to relate to. Before they started making Strangers together, Chao was waitressing while Lidofsky worked her way up the PA ladder. "Isobel is very close to me because of that late 20s crisis of identity — you can keep continuing things as they are or make big changes," Chao said. "I remember waking up in my late 20s and feeling stuck. The narratives that you have told yourself are not holding up and there’s that painful moment where you have to initiate change."