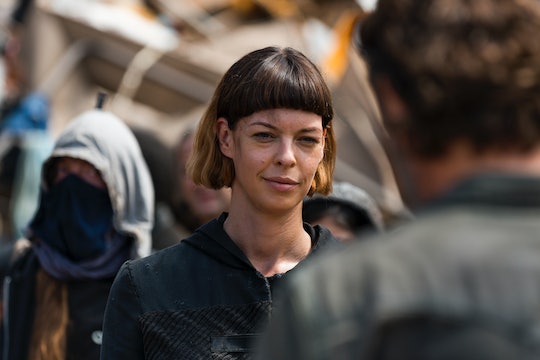 Jadis On 'The Walking Dead' Is Already Memorable

In "New Best Friends," The Walking Dead introduced yet another new community run by a powerful and inscrutable leader. This new group, called the Scavengers, live in a garbage dump that they had turned into a kingdom of trash complete with tunnels, pathways, and a death pit inhabited by a walker that was modified in innovative ways to make it even more deadly. The Scavengers are strange and creative (what was with all those interesting animal sculptures?) as well as unusually silent. The only one who seemed to do the talking — and with her own uniquely, uh, poetic style of speech — was their leader, Jadis. But who plays Jadis on The Walking Dead? She may look familiar to some of you.

The woman behind that distinctive bob haircut is Scottish actress, director, and writer Pollyanna McIntosh. Her career has spanned theater, television, and film and she's been working steadily since she was a teenager after getting her start in modeling. Being an ex-model also gave her some attention for her own personal style, which is fitting considering how easily she carries off Jadis' signature look on the show. McIntosh has taken on a lot of roles in indie dramas and horror films, but The Walking Dead might be her most mainstream role yet — on this side of the pond, at least.

Though McIntosh is originally from Scotland and spent the bulk of her life there, she's lived all over the world, including Portugal and Colombia as well as London and Los Angeles. She's also had more than a few interesting jobs over the course of her life, telling the The Scotsman in 2013:

I've had to do other jobs. I did PR for a while, I've taught children, I've nannied, I've worked in restaurants – in so many restaurants. I've designed and sold jewelry, I've done burlesque. I thought for a while I was going to be an educational psychologist. I also worked in jails in L.A. with teenage guys, teaching them how to put a play together and that's really satisfying.

That ability to transform herself is likely very useful for an actress, especially when it comes to Jadis, because so much of the character is still a mystery; there's no telling what turns Jadis will take. At times McIntosh was as in the dark about the character's backstory and motivations as the audience was. "It's a totally new way of working for me," she told Variety. "I didn't know exactly what my character was all the way through. Normally I can build from that. You create your own backstory, or you're given some of the backstory. In this case, I know some of the story – I'm obviously not able to talk about it – but not as much as I've known before, and not much of what the outcome's going to be. It's a challenge. I put my faith in it and remain in the moment."

It seems like the actress behind Jadis is as interesting as the character she portrays. And I, personally, can't wait to see how the rest of her Walking Dead story unfolds.