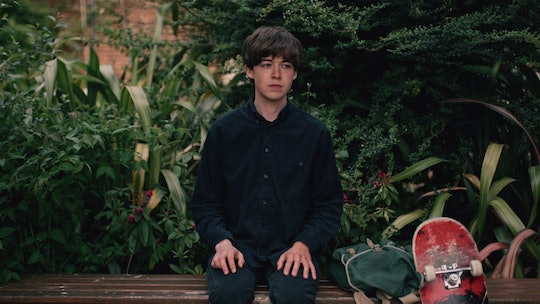 If you love dark comedies and coming of age stories, The End of the F***ing World is perfect for you. The new Netflix series is based on the graphic novel of the same name by Charles Forsman and follows two teens on a road trip. However, one of the teens, James, also happens to be a self-diagnosed psychopath. So who plays James on The End of the F**king World? British actor Alex Lawther portrays the role and he should look very familiar.

The 22-year-old is currently on the rise as he's been getting more and more well known parts as well as accolades. Lawther got his start when he was 16, after being cast in the play, South Downs, by David Hare. After the play moved to the West End, London's version of Broadway, Lawther was then signed with an agent and thus his acting career truly began. After having a few appearances in short films and TV series, Lawther seemed to get his big break in the 2014 Oscar-nominated film The Imitation Game, in which he played the Young Alan Turing, alongside Benedict Cumberbatch who played the adult version of the character. The role won Lawther the Young British Performer of the Year award from the London Critics' Circle Film Awards.

Following that success, Lawther toyed with attending drama school (he was accepted into The Royal Academy of Dramatic Art) but decided to continue working instead. He then went on to appear in a number of films, including Departure and A Brilliant Young Mind, however it was his role in the third season of Black Mirror that really garnered him significant attention.

In the season's third episode "Shut Up and Dance," Lawther played Kenny, a teen whose computer was hacked leading to someone sending him text messages with orders to do some terrible things and if he did not complete them his secrets would be exposed. Working alongside him in the episode was Game of Thrones star Jerome Flynn. The episode was so harrowing, as is typically the case with Black Mirror episodes, that many people probably began covering up their webcams with duck tape.

After Black Mirror, Lawther went on to appear in more films, including Old Boys, Freak Show, Carnage: Swallowing the Past, Goodbye Christopher Robin, and Ghost Stories. He then returned to television for The End of the F***ing World, which premiered back in October on the UK's Channel 4, though it just began streaming on Netflix today. Lawther is also currently appearing on the BBC mini-series Howards End, which follows three families in early 20th century England. Lawther plays Tibby Schlegel on the show, alongside Hayley Atwell, who plays Margaret Schlegel. This year you can also see Lawther in Les Traducteurs, though there isn't much information about the film just yet.

Besides his acting, Lawther flies pretty under the radar. You won't find him on Twitter or Instagram and he seems to keep his life pretty private. He did reveal back in 2014 that he spends most of his money on books and tickets to the theater and movies, but that was four years ago so a lot could've changed since then. Regardless, Lawther definitely seems like a laid back guy and has garnered himself a very loyal following. Though you can't find him on social media, you will find a number of fan pages made in his honor, which continue to promote all his projects and share any Lawther-related news.

As Lawther continues to take on more roles, he'll no doubt only become more and more well known. For now, you can see Lawther as James in The End of the F***ing World, which is currently streaming on Netflix.