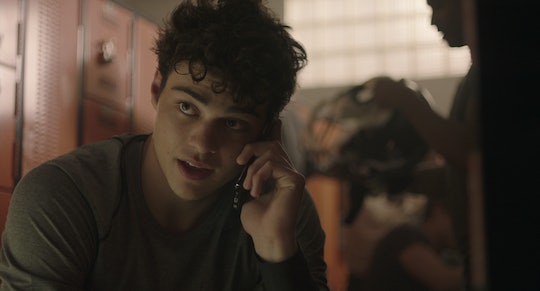 Here's How You Know Jamey From 'Sierra Burgess Is A Loser'

On the heels of its hugely successful adaptation of Jenny Han's novel To All the Boys I Loved Before, Netflix is dropping a second teen rom com later this month. Shannon Purser stars as the titular character in Sierra Burgess Is a Loser, a modern retelling of Cyrano de Bergerac, in which Sierra winds up inadvertently catfishing a boy named Jamey. So who plays Jamey in Sierra Burgess Is a Loser? Fans of To All the Boys... obviously recognize him as Peter Kavinsky. The actor's name is Noah Centineo, and his breakout Netflix branding as a sweet and earnest dreamboat has Twitter whipped into a full-blown frenzy.

Longtime Centineo stans, of course, know him from his three-year stint on Freeform's The Fosters in which he played Jesus Adams Foster. He's also slated to reprise his role in at least two episodes of The Fosters spin-off, Good Trouble, which premieres on Freeform early next year. More recently, he played Camila Cabello's love interest (and his Lothario alter-ego) in her concept video for "Havana," which won the 2018 MTV Video Music Award for Video of the Year and earned additional nominations in the Song of the Year, Best Pop Video, and Best Choreography categories.

Centineo has three more movies in the pipeline slated for release in the next year. First up is Swiped, which involves a little bit of a role-reversal for him. Rather than playing the humble, unassuming love interest, he's the cocky player, named Lance Black, who devises a hugely successful hook-up app called Jungle and coerces his nerdy college roommate James into building it. Later this year, he'll play the lead role in The Stand-In, another college movie about a dating app, in which Centineo plays Brooks Rattigan, a character who invents an app in which people can call on him to be their "stand-in boyfriend" whenever they need one. And next year, Centineo will be one of the few Americans starring in The Diary, an action film directed by Jackie Chan.

In Sierra Burgess Is a Loser, Centineo's character is something of a hot jock with a heart of gold who accidentally texts Sierra, a whip smart but unconventionally attractive high school student with aspirations of getting into Stanford. When she realizes her crush texted her mistakenly believing she was Veronica, the most popular girl in school, Sierra decides to run with it. She essentially "catfishes" him, allowing him to believe that she's Veronica, and building a relationship with him through texts and phone chats.

Eventually, her scheme grows to include Veronica, who is miserably failing her entire course load. Sierra offers to pull Veronica out of her academic tailspin in exchange for her help in pulling off the catfish. At one point, she enlists Veronica to video chat Jamey while she does the talking until Jamey gets so frustrated with what he believes is a bad video sync that he drops the call. So what will he think when he learns the truth? Sierra Burgess Is a Loser drops on Netflix Friday, Sept. 7, so you'll have to wait till then to find out.