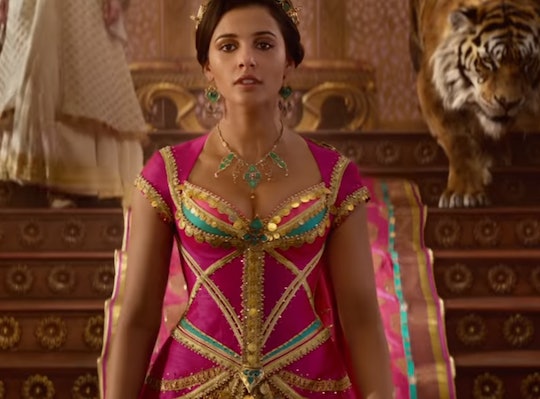 A classic film from the Disney lineup is getting a live-action remake and will hit theaters this Friday, May 24. The story of Aladdin lends itself easily to the new format, and its stars will undoubtedly be household names. But who is the lucky actress who landed the role as the iconic Disney princess at the heart of this movie? Naomi Scott is who plays Jasmine in Aladdin and the actress is certainly poised to take off with this powerful role as well as an upcoming part in Charlie’s Angels.

Scott most recently starred as the Pink Ranger in the Power Rangers film that released in 2017, according to her IMDb page. Though she’s been acting for roughly a decade, she first hit the public’s radar in the 2011 Disney TV movie Lemonade Mouth, according to PopSugar.

After a series of shorts, she won the part of Maddy in the TV series Terra Nova, which was unceremoniously canceled all too early, IMHO. A few more shorts led up to a 2015 appearance in the movie The 33, the story of the Chilean miners who were trapped underground for 69 days, according to NPR. Power Rangers followed in 2017, before Scott won the part of Princess Jasmine in this highly-anticipated film.

Scott’s casting in the part was not without controversy. She’s British and Indian, according to Vogue, rather than Arabian, which led some people to speak out on social media, according to The Evening Standard. "All these Arab actresses on the planet and they cast half-white, half-Indian Naomi Scott as Jasmine. Indian isn’t middle-eastern, Hollywood," one such protester wrote on Twitter.

But Scott felt differently about the role of Jasmine in her own life. In an interview with Entertainment Weekly, the actress said, "Having a Disney princess that looked something like me, I think was really powerful."

Scott went on to tell Entertainment Weekly in the same interview that she endeavored to play the character with the same strength and feminist attitude that made her so beloved in the animated version, explaining: "She has this beautiful arc and progression, and she goes from asking for what she wants to really just taking it, and displaying that she is a leader, and that’s what I loved the most."

One fun fact about this version on Aladdin, according to DigitalSpy, is that Princess Jasmine gets her own song in this version of the story and the musical performance was no stretch for the actress, who grew up singing.

The actress' parents are pastors of Bridge Church in Redbridge, U.K. and she grew up singing in church, according to E! News. In fact, she released an EP called Invisible Division in 2014 and another, called Promises, in 2017, according to Vogue.

That same year Scott did an interview with HuffPost where she discussed how the real "her" can be seen through her music, not on screen. "I think that when you’re acting, at the end of the day, you’re acting. You’re playing a different character but when I’m with my music, that’s me, that’s my writing, I write everything that I do, I arrange stuff, so I guess definitely the music that I put out there is me as an artist," she told HuffPost in 2017.

Church led her to another love in her life: her husband, soccer player Jordan Spence, according to The Evening Standard. The couple married in 2014 after four years of dating, according to ELLE.

Fans will get to enjoy both of Scott’s talents soon enough as she lights up the big screen as Princess Jasmine. Look for Aladdin in theaters on Friday, May 24.