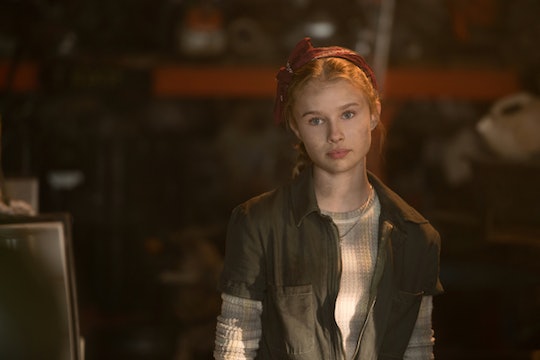 Fans Will Finally Get To Meet Jughead's Sister On 'Riverdale'

Riverdale fans have been hearing a lot about Jughead’s family since Season 1, but the time to meet them is finally here. On the fall finale, fans will be introduced to Juggy’s mom, Gladys Jones, and his sister Jellybean. Veteran actress Gina Gershon will play the role of Gladys, but fans are curious about the newcomer who plays Jellybean on Riverdale. Young actress Trinity Rose Likins takes on the role of Jughead’s fierce little sis.

Likins is a relative newcomer to the screen and was last seen in the 2017 Hallmark movie, Christmas in the Air. In an interview with My Devotional Thoughts, the 12-year-old Canadian actress revealed that she always wanted to be an actress and would perform for her family when she was little. “I used to perform plays around the house for my family, I also would do the school play every year,” said Likins. “I have wanted an agent ever since I was little. I would always ask my mom for one.”

After touring with a kid’s performance troupe, Likins eventually landed an agent in 2017. She told the outlet that she booked her first movie — Christmas in the Air — within months of getting her agent, and had only completed two or three auditions prior. Within a year of getting her first acting gig, Likins landed her second acting job on Riverdale, and the actress will also be seen on CBC’s crime drama, Unspeakable, sometime next year.

According to Variety, on Riverdale, Likins will play Jellybean “JB” Jones, a young girl who is “wise beyond her years” and is following in her con-artist mother’s footsteps. Fans have heard FP and Jughead talking about Jellybean and Gladys since Season 1, but why or where they were was never explained. In Episode 8, titled “Outbreak,” Jughead and Archie head out to Toledo, Ohio to find Jellybean and Gladys, in hopes of finding some refuge from Hiram and his sprawling network of goons. But when they get there, they find the mother and daughter team running scams to to make a living.

In a sneak peek for the new episode, fans finally get to see Jughead’s emotional family reunion. He finds his mom and sister at an auto garage, and when Jughead first sees Jellybean, she’s working on a car and is covered in grease and dirt. Gladys embraces Jughead and Archie, and hilariously insinuates that the two are a couple. “You two finally got together — I always knew there was something going on between you,” she says. Jughead tells her that he and Archie are just friends, and Archie adds that their friendship is more of a “bromance.” Gladys goes on to ask Jughead why they came and why he didn't tell her he was coming. “Last time I called, you told me I couldn’t come,” Jughead reminds her.

Jughead seems to know exactly what kind of con-artist his mom is, but he still came to her for help. With so many bad guys on Archie’s tail — like Hiram Lodge and the Gargoyle King — Jughead is desperate, so I can understand why he felt like staying with Gladys was the safest option. It will be interesting to see what the Jones women have been upto all these years, and why Gladys would push her only son away from her. Hopefully, fans will get some more answers on what went wrong with FP and Gladys, and why the family is so torn apart.