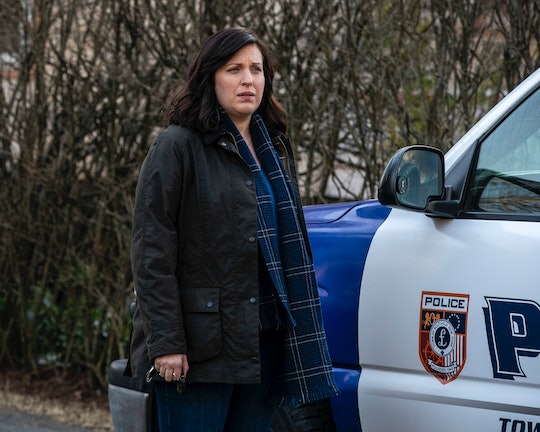 I'm Ready For Allison Tolman's Serious Side on 'Emergence'

On ABC's new drama Emergence, police chief Jo Evans finds a little girl near a crash site who has no idea who she is or what brought her there. The chief takes the girl home and promises to keep her safe, but that turns out to be harder than she thinks it will be. The actor playing the role might look familiar to you — but you wouldn't be alone in wondering who plays Jo on Emergence. Allison Tolman is more well-known as a comedic actor, but she's definitely been around for some time.

One of Tolman's first notable appearances was on The Mindy Project as Abby Berman. My favorite role of Tolman's so far is Mary Pat on Good Girls, who she played from 2018-2019. She previously starred in ABC's short-lived comedy series Downward Dog playing the dog's owner, Nan. Tolman has made other appearances on I'm Sorry and Brooklyn Nine-Nine.

But Tolman is versatile, just like Jo the police chief whose maternal instinct urges her to keep the strange little girl she meets safe at all costs. Toman is also no stranger to drama, having played Molly Solverson in the dark comedy and crime drama Fargo on FX from 2014-2015. She's also appeared on Hulu's fantasy horror show Castle Rock based on Stephen King stories and HBO's crime drama Mosaic from 2017-2018.

Basically, even though you may have trouble placing a name to Tolman's face, she's been around the block more than once. What you might not be aware of is she she was actually hesitant to commit to this new part at first. "I was nervous about playing another police officer, I'm best known for my work in Fargo," she said on Good Morning America. Ultimately, the unique nature of the show is what convinced her to sign on. "We have a family at the center of this sort of sci-fi thriller, which is a nice kind of tender center to return home to," she said.

Despite the serious nature of her new show, Tolman is still dedicated to making people laugh. Her Instagram right now features posts of people taking what she calls the Emergence challenge, mocking the pose on the promotional poster. Plus, her life is a comedy in itself. In one of my favorite posts on her account, she tells the story of running into her first boyfriend in Italy at the Colosseum, and taking a selfie with him, his wife, and her current partner.

Tolman is an avid reader, and while she's hoping Emergence will be successful, she already has her next role in mind. "...I’m waiting to stumble across an obscure historical figure that I read about somewhere, that no one has gotten the rights to yet, and then I can try to develop that into a movie or a series," she told Collider. "I think it would be really fun to play someone who actually existed."

Tolman's body of work proves her versatility, and Emergence is the next role that's going to let her shine.