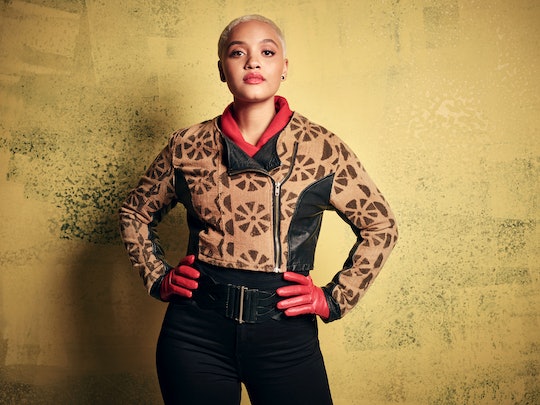 Here's Where You've Seen Joanne In 'Rent: Live' Before

More than 20 years after its Broadway debut and over a decade since its film adaptation, Rent is getting the live television musical event treatment. Viewers tuning in just to hear one of the catchiest duets in musical theater history may be asking themselves who plays Joanne in Rent: Live, and Kiersey Clemons is here to shine in a belt-off against Vanessa Hudgens, who plays her girlfriend, Maureen. Clemons is perhaps best known for the critically acclaimed 2015 coming-of-age film Dope, which starred Shameik Moore and Tony Revolori alongside her as a trio of high school best friends living in Inglewood. Clemons played Diggy, the androgynous and frequently misgendered member of the crew.

On the opposite side of the gender spectrum, Clemons also appeared on Netflix's Easy as Chase, a queer burlesque femme living in Chicago whose ardently feminist partner confronts some unexpected feelings about Chase's chosen form of self-expression. Clemons also had a recurring role on Transparent during its first two seasons as Bianca, Tammy's daughter from her first marriage. Needless to say, she has a ton of experience tackling queer themes with grace, which brings us to Rent: Live, where she plays one of the most visible black lesbians in pop culture.

Joanne is introduced to us as the new girlfriend of Maureen, a performance artist who recently dumped a filmmaker named Mark to be with Joanne instead. As a lawyer whose mom is seeking high federal office ("Mummy's confirmation hearings begin on the sixth," Joanne's dad helpfully reminds her in a voice mail), Joanne is the reasonable, grounded character of the bunch. But, of course, she gets sucked into stage managing a show for Maureen, and when the equipment fails, Joanne is forced to confront Mark, the only person around who can fix it. It turns out that they like each other and wind up bonding over their mutual lover in another memorable duet from the show, "The Tango Maureen."

Fredi Walker-Browne originated the role of Joanne on Broadway, while UnREAL's Tracie Thoms took over in one of the few recast roles for the 2005 film adaptation. In an Instagram post announcing her involvement with the project, Clemons adorably captured what it meant to her as a gay black woman to play Joanne with the caption: "my gay black heart is no longer inside of my body."

Delivering on its promises to showcase a more diverse cast than ever, Fox also cast a real drag queen as Angel (RuPaul's Drag Race alum Valentina), and Jordan Fisher as Mark Cohen, a Jewish role that typically goes to nerdy-looking white boys. (Anthony Rapp originated the role on Broadway.)

Despite being deeply beloved by musical theater audiences, Rent is not without its share of controversy. After the show's Broadway debut, prominent lesbian playwright, author, and activist Sarah Schulman alleged that the musical's creator Jonathan Larson had plagiarized large swaths of the show from her 1984 novel People in Trouble. She documents her story in a book titled Stagestruck: Theater, AIDS, and the Marketing of Gay America. Larson and his family consistently denied plagiarism.

In any event, there is no denying the cultural significance of Rent, which is being introduced to even more new audiences through the live show on Sunday.