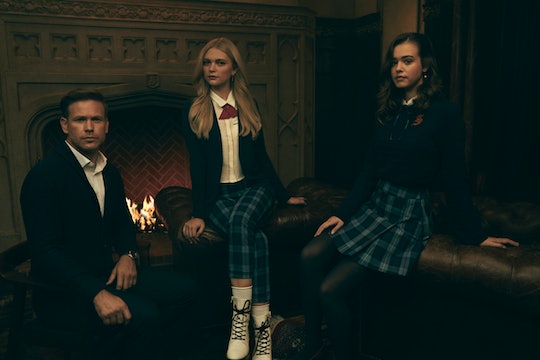 The Saltzman Twins Are All Grown Up On CW's 'Legacies'

CW’s new supernatural drama, Legacies, is taking on the next generation of supernatural teens and fans of The Vampire Diaries are already familiar with two of the series’ main characters — Josie and Lizzie Saltzman, Alaric and Caroline’s (now teenage) twin daughters. The actresses playing the pair are new to the CW family, so fans are wondering: who plays Josie and Lizzie on Legacies?

Actress Kaylee Bryant plays Josie Saltzman on Legacies, and Jenny Boyd plays her twin sister Lizzie. According to her IMDB bio, Boyd started her career as an international model, and after graduating from the London Academy of Music and Dramatic Art, she pursued an acting career, landing Legacies as her first recurring TV role. Bryant, on the other hand, has been on TV for years, and has appeared on shows like The Santa Clarita Diet, The Real O'Neals, American Horror Story, and Criminal Minds.

The Saltzman twins were first introduced in Season 7 of TVD, when their surrogate vampire mom, Caroline (Candice King) gives birth to them. They are the biological daughters of Alaric (Matt Davis) and his former fiancée Jo (Jodi Lyn O'Keefe) — a witch of the Gemini coven who is killed by her twin brother for power. In an effort to save the babies Jo was carrying at the time of her death, the coven has them magically implanted inside Caroline who carries them to term. After giving birth to the babies, Caroline adopts them and helps raise them with Alaric. The twins inherited witch powers from Jo, and and occasionally used their magic to help others when they were young.

On Legacies, Josie and Lizzie are teens who attend The Salvatore School for the Young and Gifted — a school for supernatural students — under the care of their dad, Alaric, who is the headmaster of the school. In an interview with Access Online, show creator Julie Plec described the sisters as witches who are still learning to keep their powers in check. “The school was created as a place for them to learn and hone their craft, and protect them from the outside world, and maybe to protect the outside world from them a little bit too,” she told the outlet. “They’re good girls, they want to do the right thing. They have big hearts, but they got a bit of that coocoo-magic in their minds that sometimes gets the best of them.”

On TVD the twins were fierce little girls, but with Caroline as their mom, that isn’t much of a surprise. Now that they are teens dealing with friendships and romance, their personalities on Legacies are much more dynamic. In an interview with Entertainment Weekly, Boyd described Lizzie as the strong sister, who wants to be adored, but is a little desperate for her dad’s attention. “Lizzie is very vulnerable, and I think she is quite insecure on the inside,” said Boyd. “Josie is a caretaker. She’s a little more softly spoken, and Lizzie’s the headstrong sister.”

In the same interview, Bryant told the outlet that Josie is more of a peacekeeper and caretaker, and she finds herself in her sister’s shadow. “Josie’s kind of the lesser half of the Saltzman twins,” says Bryant. “Lizzie takes up a lot of space and can make a mess out of anything, and Josie is very quick to clean up those messes and be the one to make sure that Alaric and her are as set up as they can be, even if it kind of hinders her own life sometimes.”

As a fan of TVD, I’m excited to dive back into the supernatural drama of Mystic Falls. And with a perfectionist like Caroline as their mom, I can’t wait to see how Josie and Lizzie's personalities have developed over the years.