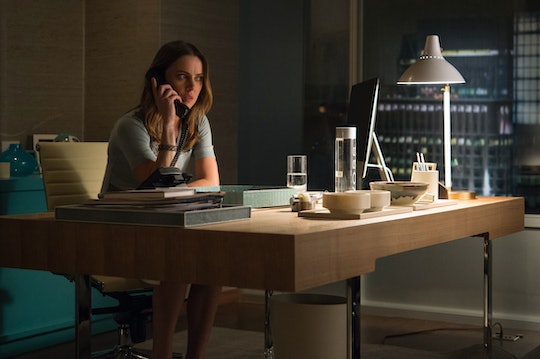 While many fans are excited to meet Iron Fist, also known as Danny Rand, many more viewers are also interested in the ladies that make up the cast of the new Netflix Marvel series. These ladies include his partner-in-crime, Colleen Wing, superhero nurse on call Claire Temple, and Danny's childhood friend Joy Meachum, who may or may not end up being a foe. So who plays Joy Meachum on Iron Fist? If you're a 90210 fan you'll probably recognize her.

Actress Jessica Stroup got the role of the comic book character, but most fans will remember her as Erin Silver on the popular CW drama 90210, a next generation spin-off of Beverly Hills, 90210. Stroup has appeared on a variety of different TV shows over the years including The Following, Family Guy, True Blood, Reaper, Grey's Anatomy, Zoey 101, Unfabulous, and Girlfriends. She's also done various movies, including Jack Reacher: Never Go Back, Ted, Homecoming, Prom Night, This Christmas, and School for Scoundrels, just to name a few.

It's unclear at this point how similar Stroup's character on Iron Fist will be to the comic book version of the character. On the show, just like in the comics, she's the daughter of Harold Meachum, who was Danny's father's business partner. After Danny's parents died and Danny was presumed dead, Harold took over the business, Rand Enterprises, making his children, Joy and Ward, the heirs of the company.

However, in the comics Ward was actually Joy's uncle rather than her brother, according to the Marvel database, and together Joy and Ward eventually team up to try and kill Iron Fist. Based on the previews for the show, it's clear Harold is a villain and isn't at all happy with Danny's reappearance. Therefore it's possible that his children become foes of Danny's as well, especially since based on the previews, it looks like Joy and Ward are heavily involved in the company, and are already wary of Danny's return.

With a cast this good, it's hard to imagine why the show isn't doing so well with the critics. Thankfully fans won't have to wait much longer to judge the show for themselves.