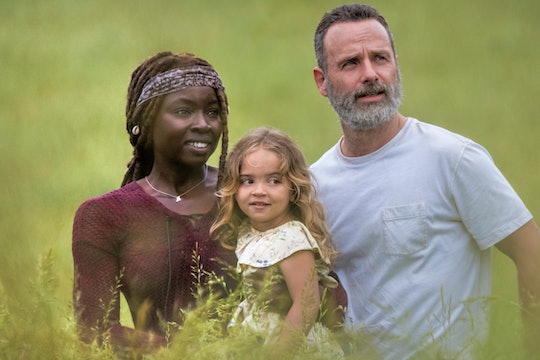 17 Kids Have Played Judith On 'The Walking Dead'

Judith Grimes has always been a reliably adorable figure in the post-apocalyptic landscape of The Walking Dead. The quietest baby in the world has grown into a little girl with a flair for arts and crafts, with many young actors taking on the role as Judith aged. But who plays Judith on The Walking Dead Season 9?

Currently, Judith is played by twins Chloe and Sophia Garcia-Frizzi, who have been portraying her since Season 6. They've been trading off the role for years, but now it seems like Chloe might be handling things on her own. She's the only one of the twins credited for the new Season 9 episodes in images and on IMDB, though the twins' parent-run Instagram accounts seems to indicate that both girls are still regularly on set. They do look nearly identical, so perhaps viewers should keep their eyes peeled to try and figure out which Judith is which.

The Walking Dead is the Garcia-Frizzi twins' only credit so far, which makes sense because they're still very young and they've been on the show for four years. Per Instagram, when they're not on set they're doing what any kids their age are doing: playing dress up, going to the park, and hanging with their friends. The Instagram accounts, while not verified, offer a lot of behind the scenes shots of the girls filming and enjoying their off time.

Chloe and Sophia Garcia-Frizzi are only the most recent actresses to play Judith. It's a job that fifteen other kids have had before them. Judith was born in Season 3, which means that in the three short seasons between the character's birth and the arrival of the Garcia-Frizzi twins, quite a few babies have briefly been a part of the Grimes family. Twins Adelaide and Eliza Cornwell were the first pair to play Judith before they passed on the role to Loudyn and Leighton Case. According to ComicBook.com, Loudyn played Judith the majority of the time, with her mom estimating that Loudyn was in "95 percent" of Judith's scenes.

After the Case girls, Tinsley and Anniston Price were Judith for the first ten episodes of Season 4. Eleora and Elisea DiFranco carried through to Episode 14, whereupon Sophia and Delia Oeland took over. When Season 5 began, the role shifted to Charlotte and Clara Ward, who were followed by Kiley and Jelyn Behun. They finished out the season, making room for the Garcia-Frizzi twins in Season 6. So far, Chloe and Sophia have held the role for the longest amount of time. Kinsley Isla Dillon also played a slightly-older Judith in the Season 8 flash forwards.

As cute as all the kids have been, they're not always the easiest to work with on set. Chandler Riggs, who played their onscreen older brother Carl, revealed in a Reddit AMA just how tough it was to act with young children. "Oh my lord those babies," he wrote. "They are so difficult. It's a set of twins, and we've had about 7 or 8 different pairs but o man they are so tough to work with [sic]." He elaborated:

Season 5 babies were the easiest, but only because I spent so much time with them and basically forced them to like me. They constantly grab at the boom mic, interrupt our lines, and jump out of our arms screaming "MOMMY" and run out of the room to go find their mom. I'm always thankful when I don't have scenes with them lol. Edit: they can be fun and very cute, but most of the time they're hard to work with.

Working with babies might not have been a walk in the park, but Judith has grown up quite a lot in the last few seasons. She may take on greater prominence as The Walking Dead continues, coming to symbolize the hope for a happier future that so many of the characters have.