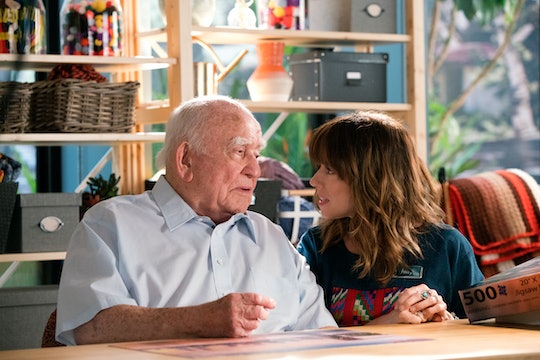 Packed with grief, sprinkled with humor, the 10-episode fist season of Dead to Me on Netflix has some major celebs in its presence — not to mention those at the helm, steering this dark horse toward ratings victory (oh, hello, Will Ferrell). Once you get to know Jen and Judy, you'll quickly assign yourself to the character you're most like so it's especially important to know who plays Judy in Dead to Me, or you'll be all kinds of lost.

Any Marvel Cinematic Universe fan will tell you Judy is played by Linda Cardellini — aka Laura Barton from the Avengers franchise. Not to totally geek out, but this woman is kind of royalty. Technically anyone who's been involved in any of the MCU flicks over the last 11 years, is. Who else can claim they've been Hawkeye's main squeeze? MCU aside, Cardellini has been in a ton of projects since her start as Sarah in the '96 series, Bone Chillers. Some of her most notable performances were as a series regular in Freaks and Geeks, the Scooby-Doo movies (she was Velma), or her long-running stint on ER way back when. There are too many credits to list. Seriously. We could be here all day.

If you were to Insta-creep her, you'll find pictures behind the scenes, with other cool celebs, and honestly just rocking the hell out of just Being Linda. In related news, the cast of Dead to Me, Cardellini aside, is altogether stellar. Just look at one of the photos posted on her Instagram page of co-stars, Christina Applegate and James Marsden.

If you're one of the few who haven't heard of this spectacular new comedy, beware: it's on the darker side of things, but done in a way that makes it super relatable. Cardellini plays the ever-optimistic Judy, who is keeping a major secret from her new friend, the less-than-thrilled-with-life, Jen. The two met at a grief support group after both lost their husbands. Jen lost hers to a hit-and-run accident, but Judy's story is a little murkier. If you like twisted, dark humor, or off-kilter friendships with two protagonists who seem all wrong for one another, Dead to Me is for you.

Den of Geek described Dead to Me as "a raw story about forgiveness, acceptance, and toxic codependency," and that sounds exactly right. According to Deadline, creator Liz Feldman (2 Broke Girls), "partnered with CBS Studios’ for the Netflix series, along with American Vandal, Insatiable, and limited drama series Unbelievable. CBS TV Studios head of comedy Kate Adler told Deadline in January, "She told a really dark comedy that I would probably best describe as a comedic Big Little Lies." As a BLL fan, I can hear all the gasps — because what a huge comp. She went on to explain, "It was a plot-driven, really dark comedy that was clearly not meant to be on network, it was clearly destined for premium cable, or streaming."

Cardellini may be forever Laura Barton, background champion of Avengers to some (me), but once you watch her multi-layered performance in Dead to Me, you might see her as more of a Judy.