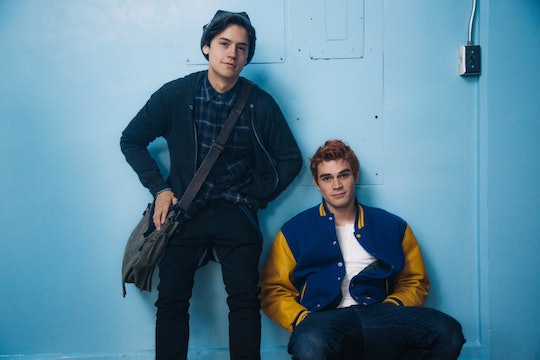 Jughead From 'Riverdale' May Look Familiar

It's almost time to head to Riverdale. The new CW series is set to premiere on Thursday, Jan. 26 and there's already mixed feelings about the new show. Riverdale, which is loosely based on the Archie comics, will follow the well-known characters, but in a darker version of the small town. The cast of characters sticks closely to those in the comics, including Archie, Jughead, Betty, Veronica, and Josie and the Pussycats. So who plays Jughead on Riverdale? Cole Sprouse will be playing the snarky and memorable character.

Cole has been acting since the tender age of six months when he and his identical twin brother, Dylan Sprouse, played the role of Patrick Kelly on the ABC hit show Grace Under Fire. After that, the twins also split the role of Julian "Frankenstien" McGrath in Big Daddy, alongside Adam Sandler. Cole then went on to play the roll of Ross' son, Ben, on Friends before reuniting with his brother as twins Zack and Cody on The Suite Life of Zack and Cody and it's spin-off The Suite Life on Deck. Since the end of their show, the twins both attended New York University and graduated in May 2015. Cole's role on Riverdale is his first major acting gig since graduating college.

Jughead, or "Jug" as he's often called, is Archie's best friend in the comics and presumably on the show as well. The character also made headlines last year when it was revealed in a newer comic that Jug is asexual. There's no word yet if Jug will maintain his asexuality on the show, but Cole hopes so. "I think that's the kind of representation that's desperately needed within modern media," Cole said at The CW Upfronts last May, according to MTV. "That kind of sexual representation is really lacking."

I agree, but ultimately it's up to the showrunners to decide what to do with Jug's character and as of right now it's unclear how they opted to approach this. Hopefully, they do stick with Jug's asexuality but if not, that certainly won't be the only way Riverdale Jug is different than his comic book counterpart. According to Cole, his version of Jug is a bit more creepy than what fans of the comics are used to. That's not too surprising though, since the overall theme of Riverdale is creepier than the original comics. The show even begins with a murder.

Despite the differences, I'm still excited to see Cole back on the small screen. You can see him as Jug on Riverdale, which premieres on Thursday, Jan. 26 at 9 p.m. ET on The CW.