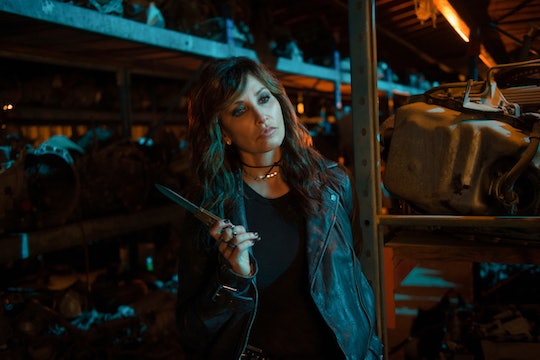 Jughead has been talking about his mom, Gladys, and sister, Jellybean since Season 1 of Riverdale, but it wasn’t until the Season 3 midseason finale that fans got to meet the rest of his elusive family. In Episode 8, Jughead finally reunites with his mom, and the actress playing Gladys fills the gritty role perfectly. Because she looks so familiar, some viewers are wondering, who plays Jughead’s mom on Riverdale?

Veteran actress Gina Gershon plays Gladys Jones, and much like the rest of the Riverdale parents, she has a quite a number of notable film and TV roles under her belt. Gershon’s most iconic role is from the 1995 film, Showgirls, in which she played a Vegas dancer named Cristal Connors. She’s been in blockbuster movies like Pretty In Pink, City Of Hope, and Face/Off and she has had recurring roles on various TV shows including Ugly Betty, Rescue Me, and Red Oaks.

On Riverdale, Gershon plays Jughead’s mother and FP’s estranged wife, who left them years ago. In Season 1, Jughead mentioned that his mom left because she couldn’t live the Serpent life, but when he reunites with her in the midseason finale, he finds her running a chapter of the Serpent gang. In an interview with Entertainment Weekly, Gershon explained that Gladys left Riverdale to take charge of her own life, and she chose this new path because she needed to survive.

“She didn’t graduate high school, but she and FP were married — then they had the kids — I don’t think she could take it, her situation with FP, and she had to get out of Riverdale to get her own life together,” she told the outlet. “She’s got her own moral code. It could be a dodgy one —- but I don’t think she’s terrible. She’s a survivor. Gladys is someone who will do whatever it takes to survive and protect these kids around her.”

Jughead only reunites with his mom because he needs a place to keep Archie safe from Hiram. When he arrives with Archie at her workshop, Gladys welcomes the pair. They tell her about Hiram’s plans to kill Archie, so she tells them they can stay. But when Penny Peabody shows up and tries to kill Archie, Gladys realizes how much danger they are really in. She interrogates Penny privately (and may have killed her?), and finds out that Hiram is looking to kill Archie and anyone with him. She tells Jughead to leave Archie and go back to Riverdale to be safe, and when FP comes to pick Jughead up, Gladys gives him a quick hug and a kiss.

Gershon told Entertainment Weekly that despite the animosity Gladys felt towards FP in the past, she does still have feelings him. “She’s still probably in love with him,” said Gershon. “They definitely have a thing. He’s been off doing his thing, so I’m sure she’s not happy about that, but there’s a lot of love there. There’s a lot of anger on top of the love, but it’s under there.”

In the trailer for Episode 12, you can see that Gladys is coming back to Riverdale, and it’ll be exciting to see how her return shakes things up.