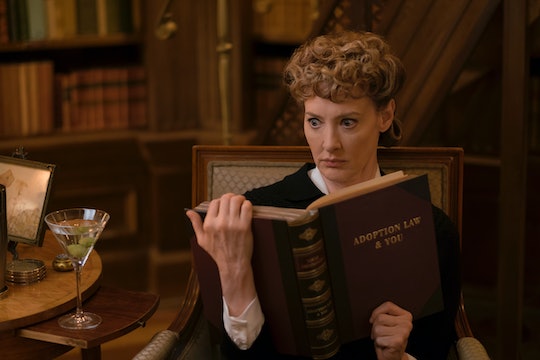 There's Nothing Unfortunate About Justice Strauss

Netflix's highly anticipated adaptation of Lemony Snicket's A Series of Unfortunate Events premieres on Friday, Jan. 13 and it looks like it has all the makings of a cult hit. Alongside Neil Patrick Harris, who nabbed the lead role of Count Olaf, the Netflix production booked several impressive guest stars to tackle the gaggle of new characters we meet in each book. Since each installment is set in a new place, there are no shortage of excellent cameo roles up for grabs. So who plays Justice Strauss on A Series of Unfortunate Events? Joan Cusack takes on the role of the benevolent judge.

The first eight-episode season was written by Daniel Handler himself (the author behind the pen name Lemony Snicket), and he also has an executive producing credit on the show. Plus, with a full two episodes dedicated to every single book in the 13-tome series, the show is sure to be loyal to the original. Warning, book spoilers ahead!

Justice Strauss comes in early on early in the books, just after the Baudelaire children, Violet, Klaus, and Sunny, are placed with the villainous Count Olaf following their parents' untimely death. Since the children are inheritors of a large fortune left behind by their parents, which they will come into once Violet turns 18, Olaf plots to marry Violet (yes, gross), in order to steal the children's fortune.

Enter: Justice Strauss, who declares that Violet's genius foil to Count Olaf's marriage plot (signing the certificate with her left hand instead of her right) deems the union null and void. The Baudelaire children like the kind Justice Strauss very much and she wishes she could adopt them herself. But their parents left behind mysteriously specific instructions for their care, and so Justice Strauss can't take them in.

In the role of Justice Strauss is the brilliantly quirky Joan Cusack, whose prolific acting career makes her one of the show's most impressive guest stars. In recent years, she's become best known for voicing the character of Jessie in the Toy Story franchise. She also played the agoraphobic Sheila Jackson on Showtime's Shameless, a role for which she was nominated for an Outstanding Guest Actress in a Comedy Series Emmy five years in a row. (She finally won after her last season on the show.)

Cusack started out as a SNL cast member for the 1985-1986 season, after which her career really took off. She was nominated for an Oscar for Best Actress in a Supporting Role for her work on the 1988 movie Working Girl, and she earned another Oscar nod in the same category in 1998 for the movie In & Out. But one of her most iconic (and beloved) roles was that of Debbie, the nanny/serial killer in 1993's Addams Family Values. Not only is she a perfect pick for the off-beat ASOUE, but also, she may actually steal Neil Patrick Harris's thunder.