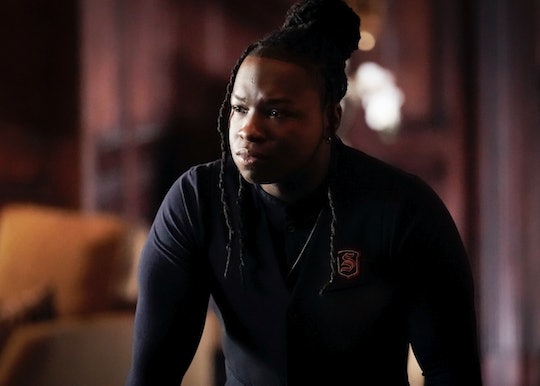 This 'Hamilton' Star Is A Fierce New Vampire On CW's 'Legacies'

The Vampire Diaries and The Originals may have come to an end, but the CW’s new spin-off series, Legacies, is introducing fans to a new generation of supernatural hotties. Centered around The Salvatore School for the Young and Gifted, the series follows Hope Mikaelson and her fellow supernatural students, including a fierce vampire named Kaleb. The actor filling the role looks familiar, so fans are wondering, who plays Kaleb on Legacies?

Actor and musician Chris De'Sean Lee plays Kaleb on Legacies, and if he looks familiar, it’s probably because he’s been in one of the hottest musicals to date. Lee was cast in dual roles as Thomas Jefferson and Marquis de Lafayette in the Chicago production of Hamilton and he also went on tour with the show in 2018. The actor has a couple of notable TV roles under his belt as well. He played Tommy Turner on Season 3 of Empire and more recently, he was seen in his recurring role as Hannibal on Showtime’s drama series, The Chi. Lee also released a music album titled “In My Feelings” in 2018, which is currently available on most music streaming services.

On Legacies, Lee plays Kaleb, a vampire who isn’t keen on hiding who he is. When he was first introduced in Episode 2, Kaleb convinces the rest of the school’s soccer team to use their supernatural powers to win a game against their human opponents. The Salvatore School has strict rules against using powers in front of humans, but Kaleb thinks that there’s no point in having magical abilities if you can’t use them.

In the third episode of the season, Kaleb proves exactly how much of a rebel he really is. When the students are cleaning up Mystic Falls as part of their punishment for the soccer game, Kaleb is caught feeding on a human by MG, and he justifies it as a primal need, adding that he’s not really hurting anyone. He is constantly at odds with MG — a vampire who insists on doing the right thing — and he even steals the honor council position MG is after, just to prove how underhanded he can be.

However, in Episode 7, after Kaleb convinces MG to feed on a human, he is confronted by the school’s librarian, Dorian. Dorian tells Kaleb that while he may be strong enough to feed on human, MG could easily lose his cool and turn into a ripper, similar to the one that killed his family. Kaleb seems to realize the error of his ways, and he later checks up on MG, with a look of guilt on his face.

But despite his rebellious ways, Kaleb isn’t really a bad guy at heart. My hope is that with more time at the school, and with further guidance from Dorian and Alaric, Kaleb will learn to become a more human-friendly vampire. And who knows, maybe at some point, fans will get a taste of his amazing singing chops as well.