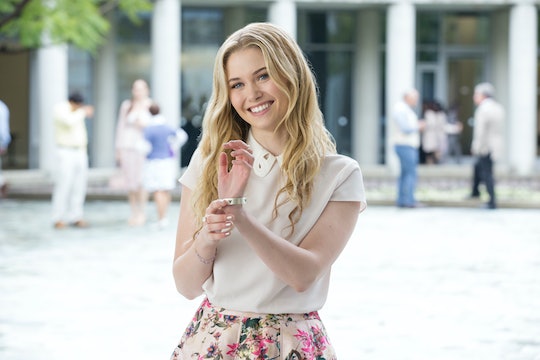 Karolina Dean From 'Runaways' Is No Stranger To TV

The first three episodes of Hulu's Runaways is now available for streaming, and you're going to be hooked. Based on the comic book series of the same name, the show centers around a group of teenage kids who discover their parents are evil. Given the teens are the main focus of the plot, it's important to get to know as much about each of these characters as possible. So who plays Karolina Dean on Runaways and where have we all seen her before? She's being portrayed by actress Virginia Gardner, who has been all over TV and film for years and has a slew of new projects coming up, so you're going to want to read up on your new fave.

Gardner, 21 years old, used to be credited as "Ginny Gardner." She popped up in a couple episodes of Glee back in the day and also appeared on The Goldbergs playing Lexy Bloom under that version of her name. She also can be spotted in one episode each of Law & Order: SVU and How To Get Away With Murder, so if all you do is watch TV (no judgement), there's a very good chance you'll recognize her.

Additionally, Gardner has been in thrillers such as Goat and Tell Me How I Die. But Marvel's Runaways is likely to up her visibility and celeb status, since it's bound to be super popular. She's also starring in some upcoming movies that come out in 2018 called Little Bitches, Monster Party, Starfish, and Liked, according to her IMDB profile. So Gardner's been busy this year and it doesn't look like things will slow down for her.

In an interview with Collider, Runaways showrunner Josh Schwartz said that they planned on casting all new faces such as Gardner for the show. Schwartz said:

That’s the fun. That’s what keeps bringing us back to the fact that we still, on the inside, do probably feel like teenagers. Also, there’s the discovery of that person who walks in, who you’ve never seen before and you don’t know who they are, and they just open their mouth and they are the character. They’re amazing!

She may be a "fresh face" but Gardner is all about the business. She told Maxim in 2016 that she's always wanted a role like the one she's nabbed in Runaways. Gardner said of her career goals at the time:

Back then, she was hoping for Catwoman. "I don’t know if it gets more badass than that, or sexier. It would also be cool to try a female version of Iron Man," Gardner stated. Well, Karolina Dean will have to do for now. And she's OK with that. She told The Hollywood Reporter that the series reminded her a bit of Stranger Things when it came to the dynamic between the kids and the grownups.

"You have this kids' storyline and that excitement, but you also bring in the adults and their storyline, which gives it a whole new feel," she said. "It's grounded and dramatic and it's also more of a family drama than it is about superpowers. It's a really good marriage between the two."

Gardner moved to Los Angeles from Sacramento when she was just 16 years old to start her career, all on her own. But it wasn't like she was a wild child. "People are so taken aback when I tell them that [I came to L.A. when I was a teenager], but it wasn’t like I had free rein. I had a tracker on my phone. My parents checked in on me," Gardner told Maxim. "I knew that if I screwed up I would be back home in four seconds flat. If anything, it made me independent and helped me grow up a little faster."

Gardner's obviously worked hard for her career. And it looks like it's about to really take off.